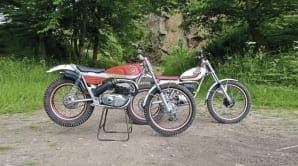 Car giant KIA has renewed its sponsorship deal with the National Trials Twinshock series for 2016.

Kia renews sponsorship deal with Twinshock series
You can ride bikes like this Bultaco and OSSA in the twinshock series.
Happy with the publicity generated this year KIA contacted series organiser, Gerry Minshall, to confirm the good news.

“It just allows us to do a bit more for the observers and organisers on whom the sport relies,” said Gerry.”