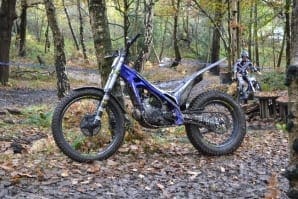 Even though the focus of Classic Dirt Bike is not surprisingly ‘classic’ it is occasionally nice to explore the modern scene to see how far it has advanced since the editor rode ‘modern.’ Being as his last ‘modern’ bike was an air-cooled Mono Yam when they were current it’s advanced quite a long way so, the opportunity to experience Sherco’s 2016 range at their test day just after the International Dirt Bike Show was grabbed faster than a free lunch

A practice ground near Sheffield
Sherco test days are incredible affairs with bikes and people and more bikes and sections and an enduro course and a lot of mud this time. It also helps if you’ve a current world champ in the team and Sherco’s rider Emma Bristow fills that role admirable, she was on hand to show how it’s done. The whole point is to introduce the new range of trials and enduro machines to the enthusiast in a setting where different capacities can be experienced side by side. Test rides are booked through local Sherco dealers and I’ve to thank fellow Pre65 trials rider and Sherco dealer Paul Ray at SPJ’s No Stop Trials Shop for the opportunity to jump on his own 300 Sherco demo bike and fellow North Easterner Paul Battensby for persuading his lad John to let me ride his 300 Enduro bike, thanks lads.

Now, just in case you didn’t know Sherco is a company with bases in Spain and France, produces a range of competition bikes and has a wildly enthusiastic team headed by boss Marc Teissier and imported to the UK by Malcolm Rathmell Sport. The Rathmell name should be more than familiar even to classic enthusiasts as he’s a former British trials champ, SSDT winner, top scrambler and ISDT gold medal winner. Malcolm Rathmell was rushing round like a mad thing on the day and we left him to it and got on with riding a bike or two.

Arguably compared to classics and twin shocks all of the modern bikes are superb machines but by paying attention to the riders who compete on the latest bikes it was easy to realise the 2016 Sherco was impressing everyone. Built around a steel chassis, the 300 has a water cooled two stroke engine, six-speeds, a feather light clutch and a range of settings for the ignition to tailor power to a rider’s needs. After spending some time at the rear of the machine, the 2016 fuel tank is now back up front with the space at the rear being air filter box. Wheels are anodized, there are disc brakes at either end, the whole lot weighs nowt and performs very well. The CDB editor is pretty old school where trials is concerned and didn’t try any of the jumping around malarkey… mainly because his skills in such areas are er… rusty. But at the test ground there were plenty of opportunities to try a selection of obstacles and the 300 was impressive. Most impressive was the riding position, upright is the way forward these days.

On the enduro course, a nadgery thing with a lot of deep ruts, this 300 enduro was docile enough for an enduro innocent like the editor to ride, clearly when it’s owner John was on it there’s a lot going on at the tight end of the wire which the editor didn’t explore. That said, it was a good bike to ride but I swear my arms are a couple of inches longer than when I set out.

A great day, thanks to the guys who loaned me bikes and to Sherco for putting it on.