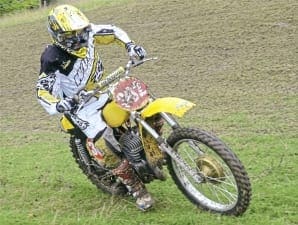 CLASSIC BRITISH MX SERIES
Wayne Partington took it to the wire but is Pre- 74 champ.
The Pre-65 championship was looking good for the 2014 champion, Ricky Pedder.

He led the class by 16 points, but second and third places were less certain.

With 40 points still available and all championship races counting towards a rider’s final points total, John Cash could still catch Aaron Graves. Indeed, all three had to be on top form to continue, or better, the status quo.

The Pre-74 championship was much tighter. Only 10 points separated the first three, and Wayne Partington’s lead over Tim Dallaway was a slender four points.

Kristian Marshall was just six points behind Dallaway. What was that saying about a certain lady “it ain’t over“.