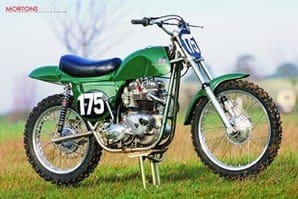 Reg relates a tale that’s a familiar one in our world – bike mad teenager spends every waking moment involved in either thinking about, fixing or riding motorcycles then gets a job working in a bike shop. "I started in VT Norridge’s at Minster Lovell when I left school. It was very much a hands-on sort of training that I backed up with a stint in college to get some qualifications. After that I went to Bikewise in Abingdon and from there it was on to Trevor Goodall’s in Didcot.

"Goodall’s was an interesting place to work, not just because I was mates with Paul Goodall, but because they were a traditional dealership and had been agents for Triumph and Norton, though by the time I started there Suzuki and Vespa were the main makes," says Reg.

So, what did cause a budding British champion to forsake the modern scene and swap over to classics? "I had a fairly major 'off' and was out of action for quite a while," Reg says. "Part of my convalescence was trials riding, which I’d dabbled at anyway and a few lads were riding pre-65 bikes at our club events and I thought, 'wow, they look great!' so I built one."

Reg’s route into classic scrambles was even easier, as he reveals. "I’d seen a magazine picture of the pre-60 scrambles TriBSA built by Terry Hobbs and thought so I built myself a bike using that TriBSA as inspiration. I thought it might be more fun than the cut and thrust of the modern 125cc scene." That was before Reg headed to Australia for year and, once back in the UK, he got involved in speedboat racing as a mechanic for a friend and started riding again. "I rode twinshock trials and even scrambled in the modern four stroke championship support series, but the Metisse project came about almost by accident. Reg has a workshop next door to Gerry Lisi’s Metisse concern and one day he called to see Gerry and almost tripped over a 650cc unit Triumph motor on the workshop floor. Gerry said to me: ‘you can buy that off me if you like’ and I thought, "yeah, why not," Reg recalls. "The engine wasn’t quite as complete, it was missing rocker boxes and carb manifold and a few other bits and pieces like engine plates and gaskets."

With the engine unit on his work bench, Reg began to check it over. "It’s a USA import and pretty standard inside apart from Japanese pistons. There was a twin carburettor Bonneville head on, so I swapped that for a single carb TR6 head, picked up some rocker boxes and an inlet manifold at an autojumble and put it back together," he says. 'Oh, and I used a 35mm MkI Amal Concentric carburettor.

As the engine took shape, Reg looked for a frame to put it in and, once again, the Lisi workshop held the answer. "The plating on this particular frame didn’t quite come up to Gerry’s meticulous standards and he wouldn’t put it into his production run," Reg tells me. "So, it went onto a shelf and gathered dust. I asked if I could buy it if I accepted that the plating was poor quality." Gerry finally agreed and came up with a swinging arm from somewhere. From there, it was a simple job for the engine plates to be made – simple if you’ve the gear to do it that is.

Reg knows the local old bike network well and paid a call to Lee Peck who prepares old bikes to take on the modern stuff in long distance trials. Lee supplied the REH front forks, which look like Cerianis, as well as Marzocchi yokes, a Campagnola front hub and a rear hub, which he thinks is from an SWM. The rear sprocket is from Talon and takes a 3⁄8 x 5/16in chain and the gearbox sprocket had to be machined down to match it.

"I converted as many of the fasteners as possible to metric," says Reg, taking the racer’s pragmatic approach to bike building, "replacements are cheaper and easier to find." Reg admits that there is a big advantage to him being a qualified motorcycle mechanic as it means he can save a serious amount of money in some areas that allows it to be spent on other things. "At VT Norridge’s, I learnt how to build wheels and it’s almost second nature now. A quick bit of measuring and a phone call to Hagon’s for spokes and rims and I had all I needed. Lacing them up was fairly easy as the hubs had been used before and there were marks on them where the spokes had been." Reg explains that his method of spoking is to hold the spindle in the vice so the wheel can spin and have a jig on the bench for the trueing up. "Getting the rim central in the horizontal plane is not too bad but where a lot of people fall down is they don’t get the hub central in the vertical plane so the wheel feels as if it’s egg-shaped," he tells me.

"My uncle, Keith Newman, supplied the Dunlop Sports D756 tyres, he runs Mobile Tyre Services and used to sponsor me in my 125cc days. I’ve got a 100/100 x 18in on the back, it’s the smallest possible one in that size range. A lot of people put on too big a rear tyre, convinced they’re going to get more traction but it just creates more drag," Reg continues. Once the rear dampers arrived from Falcon "…they’re the biggest, chunkiest and longest units I can legally fit and be inside the regulations…" Reg had a rolling chassis. At this stage, as he was intending to do the British Bike Bonanza, run by Adrian Moss over in Gloucestershire, Reg got a copy of the detailed rules and regulations for this event to make sure that his bike would comply. Then, on went the Renthal handlebars, Amal levers and a trials T80/200 twist grip, all ordered from Sammy Miller’s catalogue along with a cranked kick start. Why a trials slow action throttle? Our man feels that a quick action one will flood the engine when you crack it wide open and there is better feel with a slow action twist grip. "The only real headache involved the exhaust pipes," Reg admits. "God knows where they came from as they were ‘donated’ and I could see why when I came to fit them. A lot of heat and gentle encouragement was needed before they were right. I made up a simple silencer on the swage tool I have. It slips over the end of the exhaust, which has a few holes drilled in it and it’s held in place by a clamp."

"The tank, seat and mudguards are obviously to the Metisse design and I think they look great," says Reg. "Oh, yes, ignition is by a Boyer Bransden Powerbox – fit and forget, totally reliable and when it fired up for the first time it was great. There’s a limit to the testing I can do here, but I managed to get it fairly well set up."

The bike’s first outing was at the 2006 Bonanza and Reg finished 15th. "It’s been about four years since my last race and I was a bit rusty," he grins. "But in the next race, I was up to 10th I think. All I was interested in was getting round and for the first time out the actual result didn’t bother me so much as the bike running right." Was everything OK, I ask? "By and large yes," says Reg. "The front suspension needs sorting a little, it’s still too soft and I don’t like is the gearbox. We’re restricted to four speeds and I don’t feel the standard ‘box is up to the cut and thrust of the track. The plan is to get a Quaife five speed cluster, take out first gear and shim it up so I’ve four speeds. That’s actually a fairly popular mod, it’s just that Quaife ‘boxes aren’t cheap."

So then, is it a difficult thing to do, build a Metisse? "No," says Reg, "OK, I’m a mechanic and that’s meant I can do a lot of things myself, maybe those without machining facilities might find that the cost is a bit higher than for me but at the end of the day it’s not going to lose too much value."