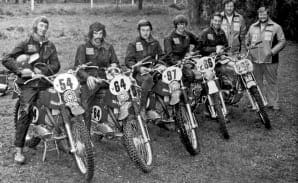 The 48th International Six days Trial in 1973 was expected to be conducted with all the razzmatazz and over-the-top promotion that the American organisation hosting it could provide. Expected, but it nearly didn’t happen at all!

THAT WAS THE YEAR…The ISDT that nearly didn’t happen
Our Vase B team with, left to right: Dave Smith, Geoff Chandler, Mick Bowers, Geoff Monk and Dave Hobbs with team management of Chris Oliver and Ian Driver.
It’s all well and good reading up on a subject and then producing a seven page feature about it, in fact the back issues of MotorCycle in the CDB archive were scoured for this feature.

However, it is much better if the writer can speak to someone who was there and actually involved, even better if that person, Chris Oliver in this case, has a phenomenal collection of related material to draw on for reference.

Chris brought a load of material along to the Sammy Miller Museum when CDB photographed his superb recreation of a 1973 ISDT team Triumph.

Chris had been part of the British team management for that momentous event and had been impressed by the well prepped Triumph Adventurer machines and promised himself one day he would build one.