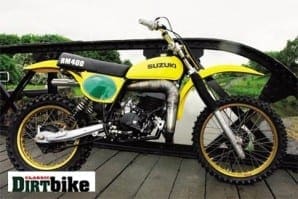 New models had to be good to stand a chance of surviving for longer than a season. Suzuki's RM400C was good. Very good.

Suzuki’s RM series redefined the profile and status of Suzuki as a force in motocross when they were launched in 1975 as a replacement for the ageing TM models. And Suzuki certainly needed a shot in the arm in the open classes after the TM400 had proved itself fast, but fairly ineffectual as a racer – and downright dangerous in a lot of situations. It was against this background that Suzuki launched their all-new RM range for the 1976 season.

The ‘A’ series RMs were a big success and, at the top of the range, sat the all-new RM370. This was a completely different beast than the untameable TM400 and went a long way to restoring the buying public’s faith in big bore Suzuki motocrossers. With its leading axle forks, laid down shocks and high-pipe exhaust, the first RM370 was a thoroughly modern machine and proved a more than capable tool on the racetracks. But, while the B version that appeared the following year featured a number of detail improvements, in the world’s biggest motocross market – the USA – the Suzuki lagged behind the Yamaha YZ400 in the sales stakes. Something would have to be done by the R&D boffins at Hamamatsu – and it was. The result was the RM400C.

Suzuki engineers had worked hard on the top end of the new model to release the real potential of what was, in essence, a fine engine. Revision of port and ignition timing, together with a new exhaust system and a compression ratio down from 7.6:1 to 6.7:1 tamed the revvy nature of the old engine and gave a more than useful boost in bottom and mid-range power. In fact, the claimed power output of the new 402cc engine was slightly down on the 40bhp at 6500rpm of the old 370 at 37bhp. And, even more surprisingly, maximum torque was also very slightly down at 32.4ft-lb at 6000rpm as opposed to 33.7ft-lb on the 370. But where the big difference was, was in the spread of torque. The 400 was in a different league to the old 370. Where a rider would have to drop a gear and scream the 370, the 400 would pull strongly – and that translated into faster lap times for ordinary mortals.

Interestingly, Suzuki claimed that most of the rider input for the design of the RM400 came from none other than Roger de Coster, Suzuki's own multi-world champ. For a rider of de Coster's calibre to suggest a bigger (but softer) engine, could only mean one thing – that it was the right way to go to get results. Talk to the man and listen – simple really.

And if the engine was a big step away from the 370, so too were the frame and cycle parts. By 1978, the long travel suspension revolution was in full swing and the RM400C boasted an impressive 9.8in at the front and 9.6in at the rear – a full inch up on the 370 at the rear and slightly more at the front. And that increased suspension travel gave more than a 'paper' advantage. The suspension was hailed by magazine testers of the day as being much plusher than the old 370's setup – and, again, that translated into quicker laps on Sunday.

The whole bike looked pretty damn trick too. An angular plastic tank came as standard (though our feature machine has been retro-fitted with an alloy B type tank), as did the sort of slickly designed plastics previously the preserve of works bikes and the specialist aftermarket suppliers. And with the new, fully floating rear brake proving to be just as effective as it looked, the whole RM400 package had a whole lot going for it.