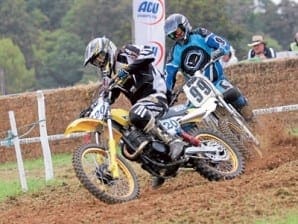 For many folk the very mention of Farleigh Castle will make the hairs on the back of their neck stand up as fond memories of the Wiltshire circuit come flooding back. Over the past five decades the legendary Grand Prix circuit in Somerset has witnessed more than its fair share of memorable races.

Three that spring to mind are 1966 – when Don Rickman’s win prevented Jeff Smith retaining his British championship; 1968 – when Husqvarna mounted Vic Eastwood won in horrendous conditions despite a puncture early in the race and 1985’s epic battle between Dave Thorpe and Andre Malherbe.

It comes as no surprise then, that any event at the Trowbridge venue always attracts a strong entry, as riders from far and wide come try and emulate their heroes while others simply wish to lay claim to the fact that they have ridden the very same Grand Prix circuit as the top stars.

One such rider who openly admitted to that fact was Frenchman Jean-Francois Helaine who, along with a large contingent of his fellow countrymen made the trip across the water for last year’s Twinshock Cup of Nations. Quite apart from representing his home nation in the first Twinshock team event, Jean-Francois – who hails from a tiny village on the Normandy coast – was fulfilling a long held dream and making his first appearance at the infamous Grand Prix venue, in fact his first ever visit onto these shores.

“So what?” or “big deal” you might say but what made Jean-Francois' visit so special was the beautifully prepared and unique machine he brought to race. On first appearances his RMH 470 Suzuki is not unlike the Yamaha HL500 Aberg replica, which ironically is what the 40-year-old father of two, based many of his ideas upon.

An engineer at the ‘University Institute of Technology of Cherbourg’ Jean-Francois has spent the last four years building his ultimate dream project bike saying, “Ever since I was young I wanted to build my own machine.”

Despite its similarity to the HL500, Jean-Francois has tried to be different, incorporating all the best features of the Suzuki range, while maintaining a strict rule of using only Pre-80 components. Apart from a few special trick parts from the era like the ‘Simons’ front forks, Fox rear shocks, Preston Petty front fender, Excel rims and the handlebars, everything else is either genuine Suzuki or manufactured by the man himself.

In the beginning
I caught sight of the machine as Jean-Francois came to the start line for his first race at Farleigh and, intrigued by its appearance, I went in pursuit. An incident in the previous moto caused a delay, so I took full advantage of the time available to take a few pictures. Despite the timing Jean-Francois was very accommodating and happily allowed me to photograph the machine prior to giving the Suzuki its maiden outing.

Unfortunately, an incident in the first turn ended any chance of further shots. Although he escaped unharmed and rejoined the fray some way astern, the damage was already done. Catching up with the Frenchman after the race and finding him buried deep in the French enclave where he confirmed my worst fears.

As he looked over the damage, Jean-Francois said, “I crashed at the start with the Tiger – Dugald Cullen – resulting in a broken handlebar stop and badly dented fuel tank.” With the possibility of a photo session all but gone, I decided to spend some time with him to discuss this very unique project and the affable Frenchman was more than happy to explain how he arrived at the present stunning machine.

“It was a dream for me to make my own motocross bike, said Jean-Francois. “At first I tried to make a copy of an HL500 Aberg Replica but now there are many copies, so then I had the idea to do something similar with Suzuki. So I made a prototype four-stroke with the best parts of the Suzuki range,” he grins.

Working to a budget
The RMH project began life around 12 years ago, with the acquisition of a 1979 Suzuki RM250. It came with a spare frame, swingarm and rear wheel and it was this that formed the basis of Jean-Francois’s hybrid mount. With his idea firmly in mind he went on to explain. “Three years ago, I really attacked the project. I searched for a DR400 but it was impossible to find one near my home, so I then bought a 1980 400GN, which has exactly the same engine.

“There were many around but all suffered from rust and the engine would not turn. It was not very serious because I had already started on the frame using the cradle of the GN400 and using the engine only as a template for fitting for size.”

Jean-Francois paused for a moment then continued, “I then found a 1980 400DR, the engine was running but there was a problem with the ignition and carburettor. From it I used the engine and front wheel hub which is the same as the ’79 250.”

The RMH chassis was cleverly grafted from the RM250 and the lower cradle from the GN400, which he had to heavily modify in order to fit, and TIG welded the two bits together. “I had no regrets cutting through the RM frame given the state that it was in,” claimed Jean-Francois. “My second requirement was that I wanted to maintain the original geometry of the RM250, that is to say the footrest, handlebar and seat triangle should have the same position as the RM.”

A modification to the rear suspension top mounting points has shaved nearly 30mm off the width of the machine. “I have decreased the width of the bike at the knees, which was one of the major defects of the 1979 RM250,” claimed the Frenchman. While on with the welding and modifications Jean-Francois added the footrests he’d handmade in 4mm and 5mm steel plate.

With the frame sorted the swinging arm that came from the RM250 was next and was in need of much welding, grinding and blasting plus other TLC before finally shipping both off to the painters. “I didn’t get it anodized because I was afraid of colour differences,” he explained.

Powering up
The donor DR400 cost €150 in total and Jean-Francois spent a lot of time working on the barrel and head, machining both inside and out. He explains: “Some of the fins on the cylinder and the head have been removed to prevent the accumulation of mud and hence aid cooling. It is also to imitate the aesthetics of the cylinders cut by Eric Cheney.” While inside, the cylinder head was enlarged and polished – using a ‘Dremel’ which is possibly one of the most useful tools you can have – to allow for the new exhaust and the bigger 38mm Mikuni carburettor which has replaced the standard 32mm version.

The machine is still fitted with a stock piston and cam, although J-F’s future plans will see these replaced with race versions which explains why the seat graphics report it as being a 470cc when it is still at 396cc. Which, with a standard bore and stroke of 88 x 65.2 gives an output of 35/36bhp after the head work. Jean-Francois goes on to say in broken English, “I compared it with a stock 400DR owned by a friend, there is a big difference, when compared with a stock Yamaha 500XT at 32bhp, there is a little more power and a little more torque too, but there is much more rpm, it's very fun and easy on and off track.”

Matching up
Not surprisingly though, we learn that there are already plans afoot to increase the capacity to 470cc – and not just to balance engine capacity with seat logo. This increase is to be achieved by moving the crankpin 5mm, thus increasing the stroke by 10mm and increasing the bore by 1mm which gives bore and stroke dimensions of 89 x 75.2. A Yamaha 500XT piston, which is 5mm less from gudgeon pin to the top of the piston head, tops off the rod and gives 470cc.

This is a task which might frighten off the best engineers but it’s one that the Frenchman already has some previous experience of performing. Some years ago he increased the capacity of his 175cc Motobecane to 228cc with a bore and stroke of 61 x 78 instead of the standard 56 x 71 by a similar process. But this is an enhancement for the future and maybe when Mr Helaine returns next time to Farleigh he may have completed it, fingers crossed.

Moving on Jean-Francois explains: “Subsidiary items like the ‘Preston Petty’ front mudguard and the ‘Simons’ forks were acquired from America, costing €30 and €400 respectively but they also have undergone many hours of treatment. The front fender was remade with a blade cutter and cut to remove the top layer of plastic that had been baked by the sun, I then sanded it with 600, 1000 1500, and 2000 sandpaper and polished it to finish.”

The rear hub had to be repaired and repainted before re-spoking into an Excel rim and also needing work were the shocks – originally from a 1980 RM125 – which had to be completely rebuilt with new seals and springs before being repainted.

“I wanted the airbox as large as possible so that the engine breathes properly so I took the largest dimension possible, taking into account other elements like the suspension and exhaust pipe,” explained J-F.

“Initially, I cut the aluminium sheets of 1mm in the form of the paper templates and I fixed them together with rivets, but I abandoned the idea as it was too complicated, not strong enough and not easy to modify.

“So I decided to go with 2mm aluminium (AG3) as it is easy to weld with TIG and can be modified.” After many alterations the finished airbox is held firmly in place by five screws through lugs on the frame.

The front number plate is made in a white, translucent plastic bought in US but the fasteners are home-made with 2mm alloy – grade 5754 – which he formed at home. Whereas the side plates and silencer, while in the same grade of aluminium, were 1mm thick.

Not exactly dear
The total build costs amount to €1942 but, rounded off and taking into account a few small items that may have been forgotten, a guesstimate brings the total figure to €2000 – which equals £1808.65 according to the currency converter site on 8 March 2010. That’s not bad for a machine of such quality. Of course this does not take into consideration the endless hours of toil and effort gone into the manufacture of parts.

That in itself is immeasurable as the Frenchman goes on to explain: “I estimated that each manufactured piece of the bike has been remade about three times, in particular the mounting lugs welded to the frame, the engine plates, inserts in the frame, side plates, spacers, the exhaust and the airbox.”

Technical hitch
A problem encountered with the action of the kick-starter hitting the right footrest caused a few headaches until a brilliantly simple solution involving a hook was devised. “I spent a lot of time finding a solution that worked and making the necessary parts. The current system works well with just a simple kick,” explains Jean-Francois.

Topping off the smart machine is a TM125 fuel tank he obtained for the princely sum of €20 – once restored it was signed by six times world champion Joel Robert. “It’s small and looks like the YZ125C alloy tank used by Sten Lundin when he built the HL500 for Bengt Aberg,” claimed the affable Frenchman.

The eye-catching machine drew a great deal of attention over the Farleigh weekend, including interest from Suzuki specialist Jan Geboers.