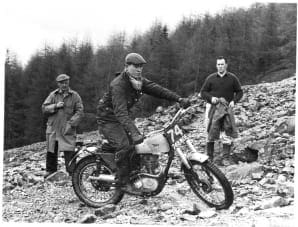 In 1966, while England’s footballers prepared to write their names in World Cup history, a young Yorkshire lad was putting his on the JR Alexander Trophy.

SID’S SCOTTISH…
Tyndrum was a long old ride from Fort William and a tricky number to get right.
“Does it feel 50 years ago?” I asked Alan Lampkin as he posed self-consciously with his 1966 Scottish Six Days Trial-winning C15 BSA.

By finishing four marks ahead of Sammy Miller in the 1966 event Alan became the second Lampkin to win the JR Alexander Trophy.

By all accounts it was a tough old week even by SSDT standards, with weather and clerical error playing their part in the eventual outcome of the trial.