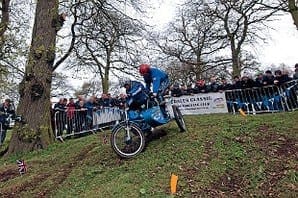 Dales Classic is trying to reintroduce the sidecar trials scene into the Derbyshire area for Pre-65s and Twinshocks up to 1985 but not monos at this stage.

Club stalwart Henry Gaunt used to passenger for Geoff Gasby in the 1970s and 80s and Geoff carried on until the mid 90s and did quite well throughout those years. The pair had another go, at Stafford Show in 2011. It was great fun, but Geoff decided it was not for him again and Henry teamed up with Bert White, another rider in the 1970s, 80s and 90s who also had good success. Bert even got Giacomo Agostini into the sidecar at the April Stafford show.

So, if anybody has an outfit and fancies trying it in a competition visit the website dalesclassic.wordpress.com or go along to one of its trials and you will be more than welcome. Alternatively, email Henry Gaunt at henrygaunt3@googlemail.com