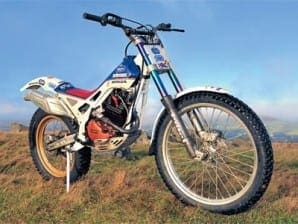 Honda was in no great hurry to introduce a proper trials bike for public consumption, preferring to release the TL125 for use in the UK. The tiny bike – a 250 version was available too but few were seen in our trials – was a cracking performer as befits something developed by Sammy Miller who, at that time was spearheading the Japanese company’s foray into trials. Miller put up respectable performances on the TL, suitably modified of course, and assembled a team of riders who made a decent mark in national and local events on similar models.

However, while appealing to the mass market and being responsible for getting lots of riders started in the feet-up game, it was hardly a serious machine for the top rider and was far from heralding the return to ‘proper’ trials bikes that the four-stroke enthusiasts had expected. The situation became more interesting when Miller debuted a large capacity machine and rumours abounded of a production version.

Honda though seemed content to build a series of works machines capable of winning events and championships without the need to produce a replica for sale. The trials world – me included – was chomping at the bit and my own personal interest was compounded by riding round the Travers Trial a few numbers away from Honda works rider Rob Shepherd in the late 70s. At that time Rob was right at the top of his ability and the exotic machine was full of the mystique that works machines had in those days.

It was not to be though and longed for replicas didn’t materialise, instead came the TLR in a number of capacities, which was better than the TL125 but still not a world beater. It was with exasperation the trials world was resigned to lusting after the works specials until the HRC arm of Honda came up with the RTL.

Contempory monoshock
It was a good looking motorcycle in 1986 – though this is an 88 version – and it’s a good looking motorcycle now. Back then it was the price that made people gasp as it was possible to buy two contemporary monoshock Yamahas for the cost of one RTL. However, like the Yam and other such contemporary machines, the Honda – while definitely a classic – doesn’t fit into any category of competition. Clearly it’s not pre-65 and it lacks enough rear dampers for the twinshock class, to the best of my knowledge there’s not an ‘Evo’ trials class so, not to be denied, Kevin rides the Honda in modern trials and it’s still a capable performer.

It’s one of three RTLs that are in his garage – the others are an 86 and an 87 – and all three are used in whatever trial he fancies riding it. “I saw this one at a trial and talked the owner into parting with it on the day,” he tells me. Naturally enough being a competitive rider, and wanting to do the best he can, Kevin has made a few modifications to the bike to make it more suitable for modern events.

The fairly obvious one is the standard Showa front forks have gone, to be replaced by ones from a 315 Montesa. In actual fact it’s more than the forks, the whole front end has been replaced and in order to do this new bearings for the steering head had to be made. “After that it was easy,” he says. Maybe for a toolmaker Kevin, those of us with skills in other areas may have had to think about it a bit.

Less obvious modifications to the Honda include a works exhaust system that gives a whole lot more freedom to the engine breathing and sharpens up the whole feel of the bike.

Next came some cutting and welding to move the footrests much further back and lower them quite a bit too. This is in line with more modern thinking in riding position and it makes a difference. There’s nothing too fancy about the footrests as they’re available from most trials parts suppliers but they’re robust enough for the job.

With the front end sorted and the riding position to his liking, Kevin felt the Showa rear shock needed a bit of attention so had a word with a retired Showa engineer who asked him all sorts of questions and made many notes before taking away his damper. Based on his notes the engineer re-valved it and tuned it to Kevin’s specification and sent it back where, once on the bike, it was pronounced perfect.

With all of the welding and machining making a bit of a mess of the frame paintwork Kevin decided to do a proper job on the bike which not only meant powder coating the frame in white but a full engine stripdown too. “It made sense to check out what it was like inside, Tim,” he says. Luckily the engine was in excellent condition inside as the spares situation is – and I quote – absolutely dire for the RTL. “As an engineer I was well impressed with the build quality of the motor, massive bearings everywhere and none of them were worn at all,” Kevin tells me.

It was the same with the crank, cylinder bore, cam and piston, all were in excellent condition. “All I had to change were piston rings, camchain, valve seats and I modded the chain tensioner. A light grind of the valves finished it off and the engine went back together easily,” admitted Mr Johnson.

Solid hours
All in all Kevin reckons the work took three full months to do and grinned when saying there were eight solid hours in sculpting the bash plate. “It was a ton weight when I started,” he laughs, “now it’s not.” Of course describing any part of the Honda as a ton weight is a bit off the mark. The whole bike only weighs in at 86kg – around 192lb – and even without the Swiss cheese style bash plate can’t be classed as overweight. The editor of this publication however…

Considering that I’d just stepped off a not very trick pre-65 BSA and on to this Honda it felt almost like a BMX bike in comparison. It was set up for Kevin who is a bit lighter and shorter than me but didn’t feel cramped as I went through the usual things you do when riding someone else’s bike for the first time.

I don’t regularly ride a bike with disc brakes so the ability to stop when I wanted was novel and there was a fair bit of feel to lever action at either end. There are few things worse in a brake than unpredictability as it can mean ending in a heap as the anchors either snatch or fail to do anything on a whim of their own. The situation doesn’t change when they’re soaked either, so full marks for the brakes.

The trials world had recognised the benefits of more than four gears for many years before the RTL saw the light of day and the Honda was not breaking any ground by having six cogs squeezed into its box. Nor was it unusual in being able to be started while any of the six gears were engaged.

This ability has to be one of the handiest developments for trials riding and was a great boon to the novice rider who, by the very nature of noviceness, stalls in sections much more often than more experienced riders. The gears were well spaced for all sorts of going and the engine was quite able to pull a high gear over the fells. Ultimate road performance is also quite high as I was passed by an RTL while thinking I was going quite fast down Glencoe Valley on a Yam in the Scottish one year.

A brief wobble in some sections showed me it was possible to ride the bike both traditionally on the throttle and in the modern style of on the clutch. I know it’s an anathema to traditionalists who never touch the clutch once in motion but even pre-65 sections need a bit of this modern technique these days. Either way it was possible to flick turn the front wheel in the tightest of situations. In Kevin’s hands – and those of someone equally familiar with modern riding – it performs very well indeed, making for a winner. If you’ve not had a chance to try one and are offered even the briefest ride, take it.