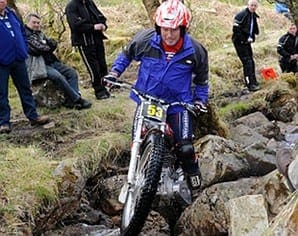 The course too was slightly different from last year with Callart Pass back in and terrifyingly steep drop down to the Kinlochleven road that is so hard on riders arms and shoulders.

With the entry split into two routes – odd numbers starting at section one and the evens along at pipeline –  as they were flagged away by special guest George Greenland, a man with quite a record of Highland trials riding, queuing was minimal and the entry kept moving. The talk from riders was about the sections this year… were they harder? Yes said the entry, not so said the organisers. Were they too hard? No, said everyone.

At the end of Day One Davey Morewood was on clean and went to be on Friday knowing all he had to do was go clean on Saturday. In the end, did just that and for the first time in a long while, the trial was won on zero. Not that Morewood had it easy as he admitted in the Classic Dirt Bike Scottish HQ – or the Tailrace Inn as it’s normally called – he’d had a scare or two on the Mamore sections – loose rocky gullies and had come out of one almost sideways.

Look out for a test of Davey’s Ariel in Classic Dirt Bike.