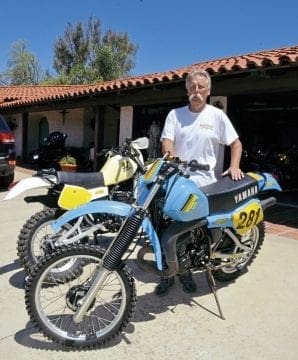 It started off as a nice idea when CDB was offered a totally original Francis-Barnett trials bike to feature. How many other comp bikes had survived unrestored, we asked, can’t be many surely? Maybe we’d get three or four out of the idea… seems there are more survivors out there than we thought. Anyway, just as we think we’ve reached the limit…

Original and unrestored
It’s a pretty standard looking machine, but Chip did a few special tweaks to make his ISDE week easier.
In 1980, Chip Howell, a San Diego-area motocrosser decided on a new goal, representing the USA in the ISDT.

“I was working for Husqvarna and tried to qualify with a brand new 390OR and couldn’t get it to finish a race, it was breaking gearboxes.

“Fellow racer Larry Roeseler went ‘Yamaha’ and suggested I try a 465 as they were really good.

“Well, I rode his bike and ended up buying one to ride the qualifiers in 1981. I ran Oklahoma, Texas, Oregon and Washington… they take your best three and I believe there were six qualifiers.”

Read more in the Sopring edition of CDB