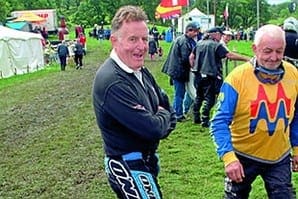 Norman will be remembered for many reasons, not least for his early involvement in the CCM factory as one of its works riders.

The 65-year-old began his off-road race career in 1963 on Greeves machines, there was a short spell on Métisse before going back to semi-works Greeves and then into CCM’s works team. Later on he rode Maico for fellow Cumbrian Bill Brown but finished his British Championship career on CCM.

Norman, who ranked seventh in the UK MX rankings, was a long time member of Bootle Scrambles Club and one of the organising team behind the Nostalgia Classic Festival.

His funeral was held at Thwaites Church, near Millom on December 23, 2011. One of his CCMs was inside the church and the pallbearers wore race shirts with Norman’s ‘7’ printed on them.

He is survived by his wife Janet, daughter Jane and son Tony who will carry on the family garage – Wharton’s garage, Millom. Our sympathies go out to the family.