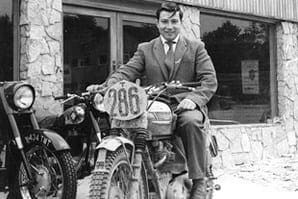 Off-road enthusiasts will know of Ken's exploits in the ISDT both as a gold medal winning team member and more latterly as team manager. His role as such has tended to overshadow his succesful trials and scrambles career in which disciplines Ken was highly skilled, earning himself the nick name 'Fleet Flyer' on a succession of mainly Triumph or Triumph powered machines.

Alongside his sporting exploits Ken was an astute businessman, running both a motorcycle sales business as a Triumph agent and motorcycle manufacturer. When machines for the ISDT squad were lacking, Ken stepped in and built Cheney based Triumphs for the squad.

He is survived by his wife Dianne and his children Tracy, Scott and Elaine.