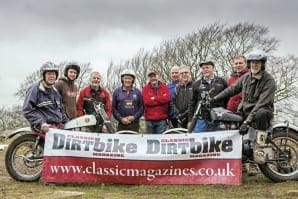 As the new year starts and we head to Telford for the Classic Dirt Bike Show, it’s a good chance to mention that our sponsored series, the NBBC, will hold its 2015 presentations on stage at the show.

NBBC series 2016
Pictured at our massive NBBC test are, left to right: Carl Winstanley, Ben Butterworth, Neil Buckley, Mick Andrews, Alan Whitton, Tony Bilton, Mike Gallagher, Errol Gowshall, Mark Francis, and Steve Raynor.
With all the winners there along with the organisers, it’s a good chance to catch up with the series’ co-ordinators and get entry forms.
Read more in the Spring edition of CDB