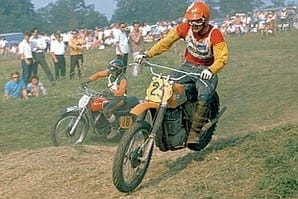 In both legs of the British round Jonsson finished ahead of series leader Roger De Coster, his win and a second was good enough to make him the overall winner on the day and squeeze Belgian De Coster’s lead to three points.

As the title chase headed to Belgium, Jonsson kept up the pressure by taking the win in both legs of the 500 race, bringing him to one point behind De Coster. Sadly it was a disaster for the Swede in the following round in Namur when Jonsson’s petrol pipe came off in the second heat. It would still be possible for him to take the series by winning in Holland but it was not to be as a freak mechanical disaster – the spare spark plug blew out of the cylinder head – halted him and his title hopes were over.