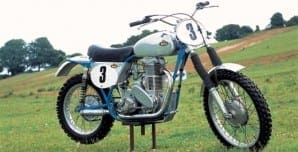 Testing the Monark brings all that is good with classic off-road sport together. A thoroughbred Swedish motorcycle owned by the successful International scrambles rider Vic Vaughan, a wonderful venue at Owestery, nr Winchester owned by Brian Lush who has worked with the Winchester MCC for around 30 years and who allowed us the use of the track, after being persuaded by Nick Haskell that it would be a good idea.

It would certainly be a great idea if we can persuade Southern Centre stars like Tony Bailey and Nigel Withers, stalwarts of the Winchester Club, to run a classic meeting next year, as present day riders feel there are not enough jumps and tabletops for modern events. Being near Winchester we also had the pleasure of a visit from one of the sports greatest favourites in ex-World Champion Graham Noyce, with many a tale being told.

The Monark of Sweden is certainly royalty, even when being viewed in static mode, displaying its majestic and flowing lines. In Scotland it would certainly be the Monarch of the Glen although preferring up and down the hills as well. If the Monark is a majestic machine so were many of its Swedish riders, Sten Lundin ex-World Champion and forever remembered for his relaxed and languid style reminiscent of our own Andy Lee and Dave Nicoll, was the most stylish of them all. Whenever I hear the Monark name I think of the first time I met Sten Lundin, in 1969 and, for the piece of advice given at an International meeting in Remelard, Northern France. Sten Lundin, like Jeff Smith, appeared to be a man of mythical powers on motorbikes when you are a wee 14-year-old living in a small Scottish village – Garlogie, 15 miles outside Aberdeen, just in case you’re looking on map.

Arthur Browning and I had been riding 380cc prototype Greeves Griffons in the support races at the French 250 GP the day before. A typical grassy hillside track greeted us at Remelard in Northern France along with a host of GP riders.

When the first race started Lundin streaked into the lead on his Monark with Arthur and me second and third, proving how fast his bike was. If we thought this legend would trundle round and pick up his start money we were in for a shock for after five or six laps and with our lightweight bikes by comparison, Arthur and I were just hanging in there. Finally Arthur got past and I needed to do the same but misjudged the manoeuvre, coming into contact with the Monark. Arthur later misjudged one of the drops allowing me to nip inside where we had a little bump, with Sten right behind he must have been thinking what were we up to. After the race he gave me the famous continental one finger salute without accepting my gestures of guilt.

The next race Sten led again, displaying the speed and fine handling on this style of track, but time waits for no man and I was able to make a clean pass which produced a win. First over was Sten Lundin and like a stately school teacher, told me in a quiet voice, that is how you should win a race. Humbled I certainly was and have tried to use his advice for the rest of my racing life.

I raced against Sten many times after that and he was just like the Monark, a man with style off and on the bike and what’s more, as a 64-year-old I still think Sten Lundin and Jeff Smith had mystical powers on a motorbike.

Before I finally got astride the Monark in our multi-bike test the old saying if it looks right it must be right certainly applies to this Swedish hybrid. With a frame based on the BSA Gold Star, what machine of the era was not and about everything else apart from the engine being English we can take some credit for this fine machine of history.

Our test bike was not an original in the form of a Sten Lundin version but a 1960 replica built about 12 years ago by Gerd Hansen from Denmark with a frame by Sunnar Ohlsen as per original spec, it certainly looks authentic. The engine is a Swedish Albin 600cc running on petrol and were used in varying sizes by Husqvarnas and Lito machines of the period.

Serving duty soaking up the bumps at either end were Norton forks at the front with a pair of Ohlins twin shocks on the back – probably appropriate for a Swedish bike. Showing that this sort of bike was a mix of the best parts available is never clearer than the use of a BSA rear wheel and the AMC gearbox and clutch, magneto ignition with separate oil tank just as per the original. This bike won its first race in England in the pre-60 class at Bath ridden by Andy Roberton proving there is quality in this replica.

The track at Brian Lush’s farm is reminiscent of many tracks in this part of England during the period, with a decent hillside used in traditional French style incorporating as many climbs and drops as possible.

Once started by volunteers on hand as my dodgy legs – thanks to a life on the MX circuit – don’t like kicking, the bike sounds as good as it looks with a deep bellow only a 600cc engine can produce. Once on the move the engine would pull and pull making for high gear work much favoured by men like Lundin, perfectly ideal for muddy conditions not encountered these days. Is it climate change or are we just grateful?

With a lazy motor and a frame a shorty could appreciate, not only me but a shorter Andy Roberton, the feel of the bike round corners and cambers was impressive, almost as if on rails. Feet up riding styles were normal and with this combination of frame, motor and footrest to handlebar position it is very easy to see why men of great talent like Sten Lundin could keep being competitive against far lighter machinery when the age of rider and bike had no right to be.

With a gearbox that never missed a change, although with a motor with this spread of power the gear changing becomes minimal once again letting the rider concentrate on riding the track, and therefore picking the best lines.

Suspension is one area the replica bikes of the present era have a huge advantage over the availability in the old days with the British Girlings being the main choice for manufacturer and replacement. Inside any 35mm fork can be found any combination of damping and springs so I am sure we are not talking about period Norton forks here.

With so many rear shocks available there is little doubt an Ohlins has got to be one of the best available and it often makes me laugh when thinking of young Kent Ohlins arriving on the scene for the first time and where they are now.

The biggest surprise for me was how this motorcycle went over the ground in such a controlled and harsh free manner. Was I imagining a heavy pre-60 bike being better over the bumps than Andy Roberton’s Cheney BSA. I’m in regular contact with Andy and the fact he had won with it, I thought what better person to confirm or deny my reactions. Luckily the Roberton verdict was the same as mine, confirming this machine with a deceptively fast 600cc motor could go over the ground in better shape than many much lighter bikes.

Weight does play a more important part in bumpy, tight turn tracks but we are talking about a bike from the late 50s to 60s that was used on rolling grassy circuits like Remelard and I can see why it was so effective. It was a pleasure to ride this bike be it over bumps, round corners or over the jumps and I must thank Vic Vaughan for the opportunity to ride it although his insistence I wear the distinctive Berger race jersey worn by himself and Sten Lundin was rather too tight and not very flattering.