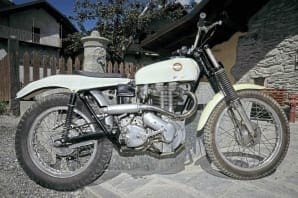 It was well known in the 1960s that Sammy Miller ran two almost identical Ariels –though 786 GON was often sidelined in favour of the more famous GOV 132.

Miller’s ‘other’ Ariel
Though similar to GOV 132 there are subtle differences with the engine spec.
Once Sammy Miller retired his Ariel-based trials bikes and went two-stroke, the machines were sold off and continued to be used at quite a high level.

GOV 132 eventually came back to Miller and is in his museum in New Milton, but 786 GON went through several owners before ending up in Italy in the hands of Carlo Ramella, at whose place Justyn Norek took these superb photos for CDB.

No static exhibit, this almost-as-famous Ariel was put through its paces by Justyn Norek Jnr, high up in the Italian Alps.

The young lad is an active mountain biker but a day spent hauling this ‘lightweight’ Ariel around left him worn-out and with a greater respect for the legendary Irishman.