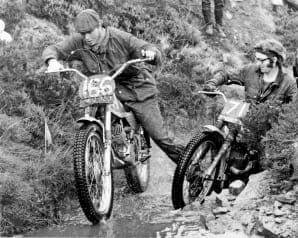 The trials world gathered at St James’s Church in the Yorkshire Dales town of Silsden, that well-known Lampkin family stronghold, on Monday, April 11, to pay their respects to Harold Martin Lampkin (65).

Better known as Mart, he succumbed to cancer after a long but typically hard-fought battle.

Amos Bilbao flew in from Barcelona and Thierry Michaud from France.