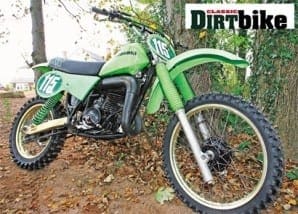 Kawasaki were a little bit late to the wedding in terms of production motocrossers. Sure, they offered a KX model as early as 1974 but, while the engine was as gutsy as you’d expect from the big K, the handling, style and overall performance on the race track was way behind the competition. Like most of the Japanese factories though, Kawasaki were quick learners.

Nudges and tweaks for the following seasons still didn’t see Kawasaki really on the money and it wasn’t until 1978 and the KX250 A4 that they really backed up the performance of their impressive works machinery with something that would give the private entrant the same chance in his local events as the works stars enjoyed on the GP trail. Up until the A4 model, production Kwacks had borne little resemblance to the works bikes and, in the fashion conscious world of motocross, that reflected in their sales. But for 1978, Kawasaki riders could hold their heads up both in the paddock and on the track.

For the first time, KX buyers got leading axle forks, aluminium swinging arm and electro-fusion cylinder lining, but still something was missing. And that something was suspension travel. By the late 70s, the long travel revolution was in full swing – and you had to be in it to win it. With just 9in up front and about the same at the rear (depending on whose specification figures you believed) the A4 may have been just about in it – but it was unlikely to win it – especially when compared to almost 12in on the ’79 Hondas.

So, for 1979, Kawasaki pushed the boat out a little further and came up with the KX250 A5. At last, the KX became competitive in all areas – thanks to an almost complete redesign. The vital statistics told a lot of the story in themselves. Wheel travel up to 11in at both ends, ground clearance up by 1½ in, seat height up by the same amount, 2in added to the swinging arm and wheelbase up 1½ in – a lot of the rest to accommodate that all-important extra suspension travel. In fairness, weight was up by around 10lb to 230lb with half a tank of fuel, but some of that at least could be attributed to the bigger forks and longer rear suspension units.

And those forks were another talking point in the press reports of the day. Testers raved about the ‘beefy’ 38mm stanchions (up 2mm on the A4 model) and praised their rigidity, strength and suppleness – all fair comment at a moment in time, but it wouldn’t be long before 38mm forks would be derided as ‘skinny’ Time is rarely a respecter of engineering innovation. At the time though, those long travel forks with their forged alloy yokes and leading axle mounted high up on the slider, were the bee’s knees.

At the back, the KX’s neat alloy swinging arm and progressively wound, laid down gas/oil suspension units came in for praise too – even if they didn’t provide for damping adjustment and weren’t rebuildable. They must have been fairly durable though, as our featured bike still has the original shocks on!