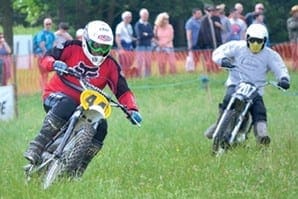 John was a familiar sight at scrambles events up and down the British Isles, although his regular attendance at Scottish events earned him the affectionate nickname of ‘McBethell’ and promotion to honorary Scotsman.
He hailed from Manchester and moved to Cumbria for work purposes in the 1960s when the farmer he worked for backed him and three others on Dots in the local scrambles scene.

Latterly though John was Mr CCM and his loyalty to the marque is legendary – he was in fact still racing his CCM up until the weekend before his passing. Also legendary was his cheerfulness and no one can recall John not smiling or being cheerful, no matter what the occasion.

John is survived by his wife Marlene and sons Jonathan and Paul. We understand his funeral on October 17 was well attended.