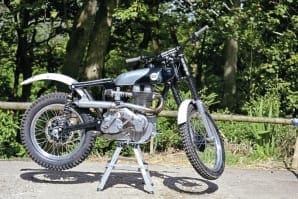 After a disastrous end to the 2014 ‘Scottish’ for James Noble it all went well for the lad in 2015. CDB asked if we could have a wobble on his bike.

It’s the right break for 147
All nice and neat, very little sticking out, just as a trials bike should be.
The worst possible finish to a day’s riding is to be carted off to hospital with a broken leg, but that’s just what happened to Yorkshire electrician James Noble in the 2014 Pre-65 Scottish – a couple of sections from the end of the trial.

He was back in 2015 and a riding number of 147 meant lots of snooker puns from us journalists should he get the right break and win.

As it happened he was right on cue throughout the event, dropping just six marks because, unlike contestants in Pot Black, us trials riders like the minimum break possible.

James lined every section up correctly and roundly snookered his opponents to beat last year’s bad break and… Okay, I’ll stop with the snooker puns.

It has become a bit of a tradition for CDB to feature the winner of the Pre-65 Scottish and as James was still letting the fact he’d won sink in we hit him with the ‘can we come along and ride your bike’ thing. James was happy to let us, so a couple of weeks later CDB headed for Yorkshire to try his big Ariel.