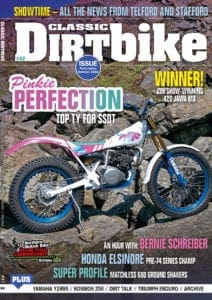 In Balance
‘Our survey said?’ We ponder the benefits of surveys and encourage you to do ours.

News, views and reviews
If it’s happening, going to happen or happened this is where you’ll read about it and the season’s hotting up.

You need…
You really do need a Husqvarna CR390 in your shed and we tell you why, but park it carefully because…

You also need…
…a James J9 Commando in there too! Why? Because it was the ultimate club trials bike of its era.

Super Profile
Matchless’ G80CS is looked at this issue. Forever associated with the great Dave Curtis, this model was up against the Goldie in the classic era.

’cross words
Berry gets bookish! The ins and outs of being a famous author, dealing with publicity and your subject sitting next to you.

Dirt Talk
What are you talking about in the CDB world? All sorts of things as it happens. Keep the letters coming in…

Moto memories
The space-age had arrived and the world was not enough… enter the Kosmos which attracted a lot of attention at the Racing and Sporting Show.

Best in show
Chosen by Classic Dirt Bike Show’s guest of honour, Gerrit Wolsink, as best in show, we get the lowdown on Bill Henson’s Jawa 420.

An hour with…
…1979 world trials champion Bernie Schreiber. Due to be guest of honour at Bultaco Nostalgia in June, we spoke to him and asked all sorts of things – this is what he said.

The Winner
Kris Winder was turned to the dark side of motorcycling by his father-in-law and compounded it by winning the 2017 pre-74 championship with this Honda.

Twinshock and Evo
We have a glance at what’s up in the more modern side of classic with some goodies seeing action on the track.

An archive gem…
Becoming distracted in the archive is an occupational hazard but it does turn up some interesting things, such as the Walwin.

Wardy’s Yam
Yamaha’s TY Mono trials bike was, and is, a good bike, but to ride one in the toughest trial in the world 30 years after its era? Must be something pretty trick.

Tremendous Telford
With Hagon’s backing, the Classic Dirt Bike Show was bigger and better than before. Here’s our take on it but what’s yours? Write and tell us.

Classic Dirt Bike Experience
Though only an element of the Carole Nash International Classic MotorCycle Show ‘our’ scene is
still popular.

Rebuilding to ride
It is time to inspect the bits, see what’s what, see what’s there and what’s usable and maybe shift a part or two and acquire new ones.