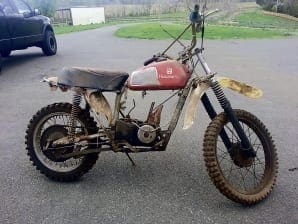 I’ve just finished reading your great article about the UK decade of ISDT.

I was looking for a restoration project last summer and looked up a friend who used to have a Honda dealership.

He raced desert in the western US back in the 1970s and MX in the east through the 1980s. He still had a collection of old bikes at his home that were potentially for sale.

One of those was a 1975 Husky 360 WR with a CR motor – just like the one Malcolm Smith is riding in the picture in your article.

The story behind the bike was that it was purchased from Malcolm Smith in the 1970s. It was thought to be his practice bike for the ISDT. As I started pulling the bike apart, I discovered there were yellow paint marks on various parts and components and the seat was an odd combination of suede and vinyl.

Eventually I was able to have a phone conversation with Malcolm, he didn’t remember the bike – too many years and too many bikes.

The seat however, was his creation. Malcolm stated that seats on those old bikes were really slick when they got wet, so he made covers with suede tops for his bikes and made a few to sell also.

I’m still in the rebuild process – still trying to find parts – some things it seems are just not available now.

When I finish the bike I can send you some before and after pics, if you’re interested.

Read more letters in the Spring edition of CDB