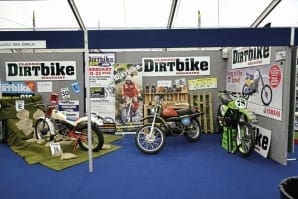 Though not a ‘classic’ show as such, the International Dirt Bike Show at Stoneleigh Park, Warwickshire will still have a lot for the classic, evo and twinshock enthusiast to enjoy.

Come check out the CDB stand at Stoneleigh.

From the Classic Dirt Bike magazine stand to the twinshock and evo club promoting their national race series and much more, there’s the best and latest modern off-road machinery, on stage talking to the great and the good of the modern race scene… and don’t forget the 150GP series finale racing on a track constructed from tons of dirt in the back halls.

There’ll be a massive trade area where deals will be done on boots, bits, and bobs… so mark down the end of October in your off-road calendar and we’ll see you at Stoneleigh.