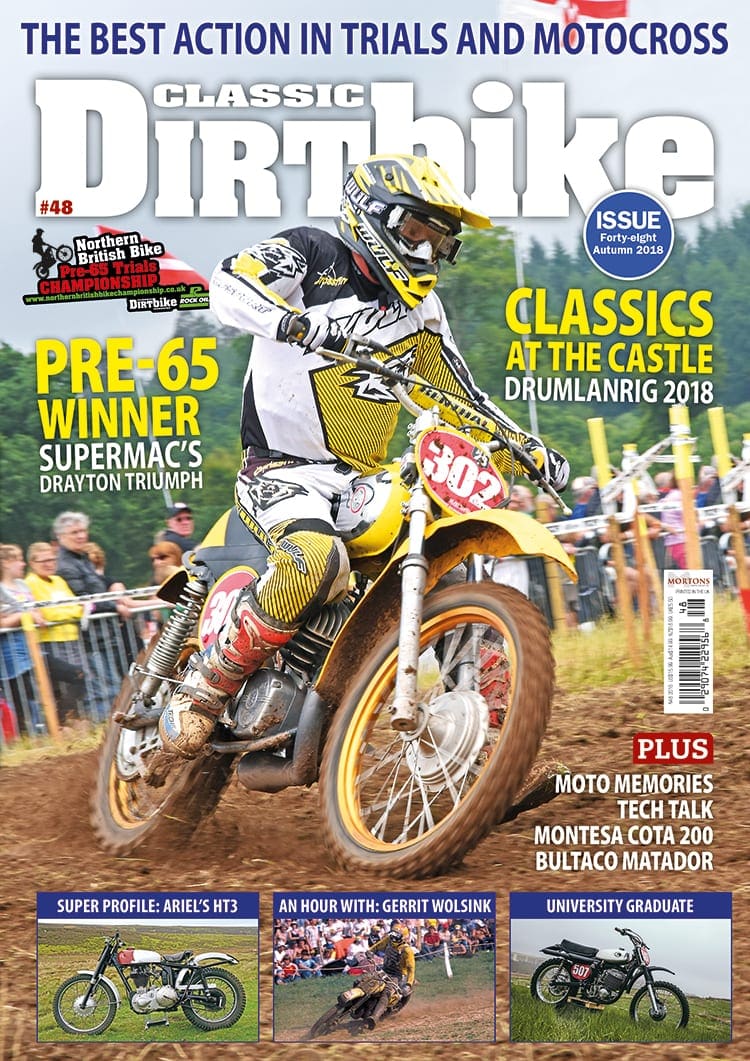 In Balance
We’ve all done the push of shame when a normally reliable bike gives up for little or no obvious reason.

News, views and reviews
If it’s happening, going to happen or happened then this is where you’ll find it… and the season is hotting up.

You need…
… yes, you really do need a project in your shed – be it a trials, enduro or MXer – and we tell you why. But park it carefully because…

…you also need…
… a Bultaco Matador in there too. There’s just room if you push one or two of your other bikes closer to the wall.

Super Profile
We take an in-depth look at Ariel’s four-stroke single trials bike of the Fifties except this is an HT3 not an HT5. Talk about rare…

John Dickinson column
The elder statesman of trials journalism always has a view on something and he puts it across here.

Dirt Talk
What’re you talking about in the CDB world? All sorts of things as it happens, bring it on we say and so you did, we’ve a packed letters page this time.

Ian Berry column
That Mr Berry knows a thing or three about MX which is why we give him a page here for his views.

Moto memories
These moto memory images are carefully chosen by the editor as he trawls through back issues of magazines and spots something which piques his interest.

And the winner is…
…Gary Macdonald! For the second year in a row the Kinlochleven joiner won the Pre-65 Scottish. We check out his bike.

From the archive
Sometimes it’s easy to find an archive piece, other times it’s hard, but occasionally something special leaps out at you as you’re searching for something else.

An educational masterpiece
In order to up their game, Greeves approached Queens University Belfast for help in developing their big two-stroke. We look at one taken a bit further.

An hour with…
… Gerrit Wolsink, guest of honour at Telford’s Classic Dirt Bike Show and top MX star of the Seventies.

Earth mover’s delight
When the Rickman brothers developed their Metisse, the MX world was in awe, then suddenly club riders could get one too…

This sporting world
CDB heads to Scotland – twice – and to Cumbria for three cracking events which enjoyed mixed weather.

Scottish Classic Grand National
No, not horses but lots of horsepower as the cream of MX heads to Scotland for the superb setting of Drumlanrig Castle MX track.

Rebuilding to ride
It is best to plan during rebuilds – it doesn’t always work out that way of course, but it’s nice to have a plan.

Tech Talk
Oh no, what happens when a vital thread strips, one which a stud screws into and its position is critical to component alignment?