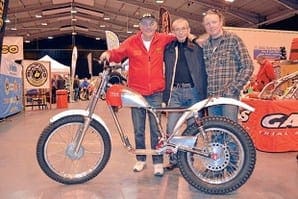 That’s Rob in the middle, with Alan Whitton on the left and Paul Ridgard on the right. The trio are collaborating on producing Bantam frames and rolling chassis like the one they’re standing behind. Rob’s been involved in frame making for some time, since the 1960s actually when he did grasstrack chassis under the Sigma name.

The occasion of the photograph was when Rob, Alan and Paul shook hands on a deal for Alan and Paul to make Rob’s Bantam frames. The frames are jigged from Rob’s original though the next batch will have frame tubes under the engine to make them Pre ’65 Scottish legal.

If you need a Bantam frame contact Alan Whitton on 07711 218818 or email him on alanwhitton@hotmail.com