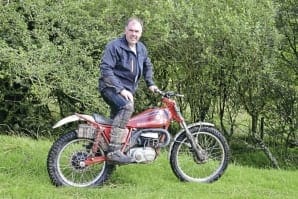 IN BALANCE: The time has come
I’ve been threatening to pull my B40 apart for quite some time now, not that there’s anything seriously wrong with it but just a lot of little things have had a quick fix to tide me over until a better job cold be done. It was helpfully pointed out to me I’d been saying this strip down was going to happen after the pre 65 Scottish… for the past four years.

The catalyst for action came as the container/workshop was getting a bit crowded with several bikes all squeezed into a small space, something had to give. A flurry of activity meant our project Yam was stripped and my Can-Am built into a working bike which left space on the shelves.

An hour spent looking the B40 over to see what needed to be done highlighted a number of areas where attention was warranted.

Most obvious was a leaking fork seal, next was the colour of the spark plug… a carbon black, then the split mudguard, an almost complete lack of front braking, some hastily fettled damage to the rear brake and chain tensioner and, well the list is quite comprehensive and included a few things such as lowering the footrests, these have been going progressively further back and down since I got the bike, plus a little bit of prettying up work on the rear hub. So, with some available time, some space, spanners whirled in to action and suddenly there was a B40 in kit form.

To back track slightly, some years ago, when stuck for space, I extended the container by adding a timber framed side on to it. This effectively doubled the space I had but I forgot the golden rule… the more space you have the more space you fill.

Sure enough, the space I felt I could usefully use to work in was filled in short order. So, I’m still stuck for space though the walls of the container seemed remarkably empty… perhaps a shelf here, an upright there, some more temporary shelving and yes, all the stuff on the floor is now on shelves!

Have I got more room? Are you kidding! Not a chance. It even descended into the realms of absurdity when I had to pick the engine, safely fastened in the bench top cradle I made years ago, and carry the thing into the subworkshop No2 to allow a bit more space for the parts washer to be stripped down.

Yes…. my little bench top parts washer has given up the ghost. This has been a godsend and a ‘why didn’t I get one earler’ sort of thing. We’ve all used them, old oil tins but if you haven’t got one of these reciprocating parts washers go out now and get one.

Anyway, the switch broke on mine and it’s not a part stocked by the manufacurers – afterall the whole washer is only £40 – so, I happened to heading into the big city where there is a Maplins and when presented with the old switch the more than helpful people in there said ‘walk this way’ and took me to a display of a good number of similar items. One was secured for about a quid, parts washer now works again.

There must be some science to this somewhere surely? What Newtonian rule dictates any empty space in a workshop must be filled? The flip side of that rule is, no matter how much stuff you have, there will always be space for it somewhere in the workshop.

Of course it’s easy to say all that needs to be done is a little bit of organisation and to a point this is what’s happened but the problem is our hobby is not a rigid structure, it’s a fluid one which grows and shrinks as parts are acquired and traded. None of this is any real help when trying to maintain order in a workspace.

Thankfully though, I seem to be going through a phase where things are starting to be in one bit which means at least they can be wheeled out of the container and work can happen, which is a good thing as a big box of cable stuff from Venhill has just arrived and the B40 engine on the main… er only… work bench has had to be moved to the No.2 workshop as the space is needed for things like solder pots and heat guns, oh and a fire extinguisher.

I blow hot and cold with this cable making lark, I can generally make them alright but it’s not an easy process seeming to require more hands than the average human being is issued with.

However there are useful jigs and attachments to make the process a whole load easier so, hasten to page 50 and see how I got on.

As this column is being written an email pops up from our reception area to say an eagerly awaited parcel from the USA has arrived. Our new project bike the Yamaha IT465 has been provided with a decent set of crank cases thanks to Mike Husted, a fellow member of the Australian Yamaha IT forum.

There was a flurry of activity in the office when the box finally made it to the CDB desk and was torn open to reveal a set of cases good enough to hold pride of place on the mantelpiece. Thanks Mike, just got to get on now and create a bit of space in the workshop…