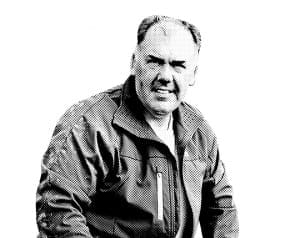 It isn’t only the trials world that will have been saddened by the passing of inaugural world trials champion Martin Lampkin as, like many of his era, he was active in all disciplines.

Elsewhere in this issue is a pictorial tribute to Mart, the youngest of the three Lampkin brothers, who succumbed to cancer on the April 2, 2016.

Though the media flocked round him as he lifted British, European and World trials titles plus an SSDT or three, Martin never seemed happy with the superstar attention and, when being interviewed by this magazine, admitted he was much more comfortable with being ‘Dougie’s dad’ than ‘trials legend’ himself.

Our thoughts and condolences go to the whole Lampkin family at this sad time.

Chain of events
Generally speaking I try to keep a few spares on hand in the drawer so when the time comes to replace say a chain sprocket set the relevant bits are already there so it’s a quiet evening’s work to fit new ones.

Yes, I know it’s not that difficult to get hold of bits but, as recent events have shown, a small hiccup in the supply chain can cause major grief.

I changed the B40’s chain and sprockets more than 18 months ago and as soon a soon set goes on I replace them in the spares drawer with new ones… generally, or the sprockets at least as chain is easier to obtain at the local bike shop where they offer a superb choice of 428 chain but raise a quizzical eyebrow when a 13T BSA gearbox sprocket is asked for.

Then I forgot about it for a few months until October’s Stafford show when I was always one customer behind the last 428 sprocket on several stalls. Still not too much of a problem, I had a rear sprocket, some chain and surely front sprockets would be in stock again and I’d remember I needed one.

Time does indeed march on and in preparation for the forthcoming MoT test before the first round of our Northern British Bike Championship series I managed to locate a front sprocket, only for the courier service to attempt to deliver it while I was in Jersey for the two-day trial and to take it back as undeliverable.

Then Easter happened and a brief interlude of speed where for about 75yds – hey metrication I’m old… ‘yards’ is what I understand – I managed to lead my heats at Red Marley.

How did such a thing happen? Well the theory goes my Triumph is a long and heavy old thing with standard compression ratios that produce the huge – for 1961 – 42bhp.

This doesn’t spin the wheel on the start line but gives grip while all the super-high compression ratio’d machines, running on dope, are pawing the air with their front wheels or snaking sideways as their rear tyres desperately try to find grip.

This also explains why 75yds later in a crescendo of noise and plume of dirt the others in each of my heats come hurtling past just as we all reach the road crossing.

Except in the first heat when ‘a rider’ and no I’m not going to name him, got unexpected grip in the Worcestershire mud and spun round at the bit of the hill called the pimple.

Suddenly facing downhill, throttle wide open, really sharpens the reflexes and with more presence of mind than I could manage the lad laid the bike down. Unfortunately the following rider had little option but lay his bike down and, well you get the idea as I got there a few seconds later there was nowhere to go so down went the Triumph.

Thankfully there were no injuries and with a bit of careful manoeuvring on the slick mud all three of us were off the hill. Despite the weather forecast the day didn’t turn out as bad as it could have done and as the hill dried, times fell, speeds increased and it was a good day’s sport.

Back at base my little power washer made short work of the generous coating of mud and while the bike dried I’d time to look at the B40. Its rear wheel was out in moments, sprocket off in seconds, new one offered up in place… hold on!

The chain came off in Jersey and it rattled around the drum between the sprocket and spokes and had nicely nicked each of the spokes to the point where my MoT tester would have typed the word ‘fail’ on the certificate.

Luckily Central Wheel did a rapid turnaround and a few days later the wheel was back, tyre on, sprocket on, new front sprocket arrived and fitted, MoT passed. All I needed to do then was pick up a spare front sprocket at Stafford show.