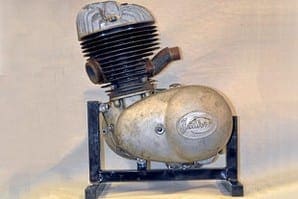 Well, when we say ‘we’ pull a Villiers apart we mean someone who knows more about them than us and can actually put it back together correctly (Steve Gollings, Villiers Services). Along the way we’ll tell you something about these engines and how to look after them, what bits wear, what bits don’t wear and how to avoid damaging them.

Okay, Villiers engines… is there anyone out there that doesn’t know the Villiers company was the major two-stroke engine supplier to the British industry?

It’s arguable that the industry wouldn’t have had nearly as many manufacturers in its list had it not been for the Wolverhampton manufacturer. In the heady days of adventure in the post Second World War era in the UK, it seemed anyone with a shed and a mate who could weld, thanks to service training, could become a motorcycle manufacturer by ordering an engine or two from Villiers. 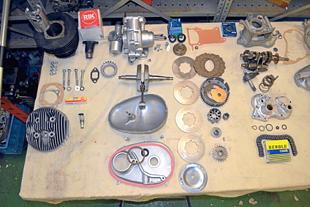 Some of these machines were awful looking things, others were much better. It wasn’t always the independent makers who were the worst. Some skilled enthusiasts were happy to ignore what the manufacturers were offering and set out on their own to make their ‘ideal’ bike, occasionally becoming manufacturers themselves. Whatever the situation, Villiers was happy to provide an engine.

There are hundreds of variants in the Villiers range, sometimes the difference is negligible – maybe a cover, or a compression ratio. For the purposes of this small feature we’re looking at the 37A as used by the comp world in the 1960s. Except the 37A is a trials engine and the scrambles variant is a 36A… don’t complain to us, write to the manufacturer… For this feature though they will be referred to as the same.

Editor Britton had a Villiers bike a million years ago, cost him a tenner from Pattison’s salerooms at Crawcrook – how many northeasterners remember them? It was a ten quid bike in every horrendous meaning of the phrase. This thing would break down just looking at it, so it came as a surprise to him when Steve said the Villiers units were generally bombproof. “We’ve had them in here totally worn-out, yet still running. So long as there’s a spark the Villiers will run, even if the crank goes up and down more than the con rod.”

Points to watch
It is a two-stroke engine, so crank seals need to be in good condition, clutch baskets can crack under stress of an MX unit. The trials ones are fine but there are billet alloy baskets available, they fit both and are light. Ignition systems too can wilt – Bill Wilkinson had six DNFs in the six events he rode before winning the 1969 SSDT for Greeves – so electronic ignition is the way forward here.

There’s some dispute over crankshafts, the standard motors have a bob-weight crank. A popular improvement is a full circle but there are those that swear by the bob-weight for trials riding. The answer is to chat to those who use them and ask to try. 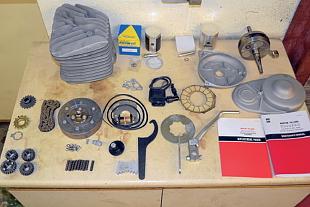 Saving weight is a major concern for comp riders and there were a number of alloy barrels available as aftermarket fitments. Popular ones were made by Parkinson, DMW and Marcel.

Greeves made its own barrel and it came ready to use with an engine under it and a handy rolling chassis complete with wheels, tyres, carb… basically you bought a bike – we don’t recall Greeves selling barrels only. There may well be other barrels out there, tell us if we’ve missed any please.

Pay attention to primary chain tension, it needs the gearbox shimming to adjust, use a good quality chain and the right oil. Make sure you keep an eye on the bottom lug bolt tightness, or it will snap off. That is about it for a Villiers unit.

When asked if there was anything else Steve added: “If you’re stripping the motor then change all consumables when you rebuild it and build it right.”

As used by…
It’s probably quicker to say who didn’t use a Villiers engine rather than who did. The proprietary engine maker was the mainstay for just about every two-stroke comp bike maker in the UK during the 1950s and 60s. Don Morley’s book, Classic British Two Stroke Trials Bikes, lists the majority of them. Some of course were more successful than others but the list is a massive one and as far as we can figure the only major manufacturers which didn’t use Villiers engines at some point was BSA – it had the Bantam – and Triumph – it didn’t do two-strokes much after 1933.