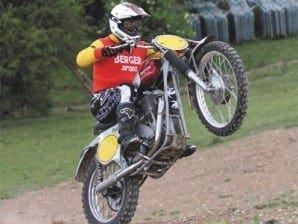 When changing colours it would essentially become a Monark and, one more time, a Lito. Therefore testing the Husqvarna version has to be compared to the bikes of the same family tree, the Monark we’ve already tested and the originator of these three Swedish scrambles bikes – the Lito.

All three are essentially the same bike but with different development by their respective owners over a ten year period advancing their reputations until the emerging lightweights reduced their standings in the 500cc GPs to the realms of a dinosaur.

Not just the production lightweight two-strokes but the first predator on the scene the works BSA that became the B50 weighing a mere 207lb and carried the great Jeff Smith to his World titles. The battles Jeff Smith had with Rolf Tibblin on much heavier machinery have been well documented by Jeff himself in his column for this magazine.

All three marques never produced a production version of these GP bikes and used the publicity gained from racing success to enhance their other business interests.

Lithograph
The Lito was derived from Lithograph and was part of a printing company. Monark were cycle manufacturers and still produce bicycles to this day. Husqvarna made AGA style cookers, washing machines and chain saws which would have given them their two-stroke know-how.

Husqvarna, with Rolf Tibblin two-stroke mounted, winning a 250cc European Championship in 1959, this class was not to gain World Championship status until 1962, must have seen winning a world title of enormous publicity for their products.

Therefore with Sten Lundin becoming World Champion on a Monark in the same year as Tibblin’s European success the 500cc Monark suddenly became a Husqvarna for 1960, bringing a first World Championship title for the Swedish make ridden by Bill Nilsson.

Another World Championship for the big four-stroke was added by Rolf Tibblin first in 1962, after recovering from a broken leg in 1961. 1962 must have been Husqvarna’s publicity departments dream come true.

Another 500cc title for Tibblin on the non production four-stroke and the first ever 250cc World Championship for Torsten Hallman on the production based two-stroke.

Rolf Tibblin again was World 500cc Champion in 1963, as was Torsten Hallman in the 250cc class but Jeff Smith finished third on a bike with less power but weighing in at least 100lb lighter.

In 1964 Smith and his unit BSA put an end to the days of the big bike dominance though it was a close run thing with Rolf Tibblin, this time on a Swedish Hedlund, finishing 2nd and Per-Olaf Persson finishing 6th for the Husky four-strokes final hurrah.

As this new concept of 500cc moto-cross bike being lightweight with less power came to pass, though only available to the works BSA riders, most people were hoping big men on big bikes could still challenge for top honours but the tide had turned. Paul Friedrichs and Rolf Tibblin had finished 2nd and 3rd to Jeff Smith in 1965 and the day of the two-stroke competitive production 500cc class machine had arrived and as they say, the rest is history.

No lightweight this Husky, weighing over 300lb, but just looking at it sitting in the field of Brian Lush the landowner of Owslebury circuit near Winchester and through the lens of Nick Haskell’s camera we see an object of desire that just has to be sampled.

The stunning Husky tank jumps out at you in any photograph and this distinctive feature was carried through the two-strokes of Tibblin, Hallman and Heikki Mikkola production built works bikes.

Will this test make it less enjoyable to perform when history tells us this was the last of a dying breed in 500cc GP scrambles? Of course not as we know it was the last fifteen minutes of the GPs that really took the toll on the rider.

Remember GP tracks in Luxembourg were ran round orchards and grassy fields where two laps after the forty minutes were up could carry you into the fifty minute bracket where men would run out of energy and bikes out of petrol. This happened when Vic Eastwood and myself rode the CCMs in 1976. Vic had an unassailable lead going into the last lap only to run out of fuel, the irony is that I carried on and finished third overall in the Luxembourg GP with the same tank and motor as Vic.

My tests are only ten minute stints at a time so a fresh old rider and a bike that history has proved was a worthy world champion and kept being competitive against the onslaught of the lightweights for the majority of a GP and we have a level playing field for any comparisons.

Being a short-arse often had its drawbacks when the suspension on the more modern bikes reached 12in, 15in was tried in development by many, but as time has shown this Husky was no problem to sit on when compared to a modern bike. The fact is the ‘seat to handlebar to footrest’ combination felt right for me and therefore the stature of Rolf Tibblin at well over six feet tall might have had something different, so like Smithy would like to tell you, just get on and ride it.

Well I did just get on and ride it after it had been warmed up by Tony Verbeeten with no fuss. Tony and his brother Rick are the proud owners of this bike and many more off-road classics which they like to use in anger.

This bike has the 500cc motor opposed to the 600cc engine in the Monark which I tested previously. Should I have expected something less enjoyable to ride with less cubes? In theory yes but as always in practice it is different. This was a free revving motor feeling much brisker to open up compared to the 600cc Monark.

As individuals we all like different things and off-road bikes are no exception as the terrain and courses tend to suit individuals in different ways. Dave Nicoll used a road cam in his factory B50 for the television races as they were just about guaranteed deep mud or snow. This gave him plenty of bottom end power when coupled to pulling a high gear, producing plenty of grip and wins.

This sums up the different feel the same Albin engine used in the Monark and Husqvarna gave, one being 600cc and the other 500cc. I preferred the free revving 500cc motor that would have had to be used for GPs but on different courses on different days then the final outcome would probably have landed up equal.

Our test track at Owslebury is made up of climbs and descents incorporating adverse cambers necessitating good throttle response from the engine and precise steering from the frame, to give the rider the confidence to relax and concentrate on riding quickly for a long period of time. Throttle response was perfect from this petrol burning thoroughbred and it was such a joy to ride the cambers in an uphill and downhill configuration that the weight seemed irrelevant, or was it a benefit in these circumstances? The steering allowed the drifting of the back wheel when coming out of corners to be alternated feet up or sitting down with both feeling as stable and confidence boosting as one another.

The suspension was through Norton forks with a Victoria front wheel and BSA rear wheel favoured by the Swedes at the time and proved a good set up on our test track.

The AMC gearbox and clutch worked perfectly when driven hard, and coupled with good gearing made race starts and cornering an easy choice. The heavy weight of these machines, unless perfectly balanced, can be a nightmare to jump and ride the bumps of scrambles, but this bike developed through three makes in the 50s and 60s was as good as it gets and gave the tester another fun day he probably does not deserve.

How good were the bikes that finally became a Husqvarna, winning the 500cc World Championship for Bill Nilsson in 1960 and Rolf Tibblin in 1962 and 1963.

Look at the history books and before that nasty Jeff Smith put his lightweight BSA into 3rd place in the 1963 500cc World Championship and we have the answer.

The prime year for the three of the same was 1962 when the top five places in the World Championships were taken by Swedish riders on Husqvarna, Lito and Monark machines. No respite either in the Moto-cross Des Nations in Switzerland where the Swedish contingent of Tibblin, Nilsson, Johansson and Ove Lundell took the flag all abreast on the finishing line, six minutes ahead of the British team.

It certainly has been an honour to ride the Tibblin Husqvarna replica but a photograph of Tibblin winning the British GP at Hawkstone Park puts a different slant to the real thing. Ceriani forks, AJS 7R rear wheel and a far bigger barrel than our test bike incorporated and more in keeping with the physical size of the 600cc barrel on our Monark test, I wonder…