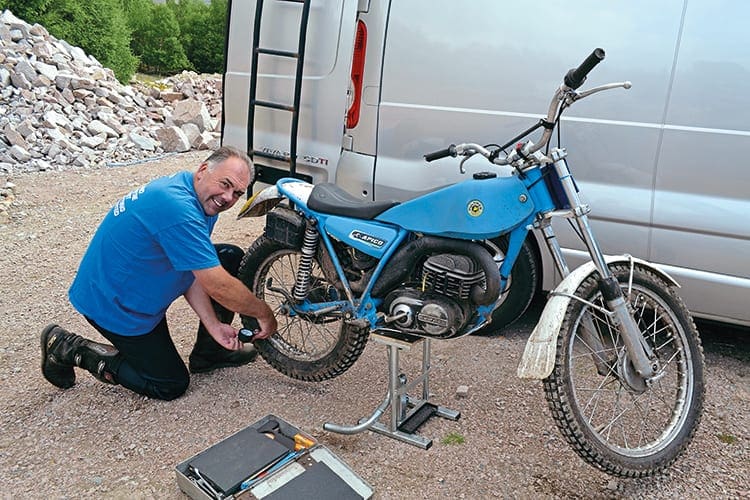 I’d be surprised if I’m the only one who has missed the glaringly obvious until it’s pointed out or another unrelated task reveals what should have been clear from the outset. Thankfully such incidences are rarer than they used to be, or maybe I’m at that age where I can’t remember them. The reason for the subject of this issue’s column occurred when putting the battered remnants of the project Triumph together quietly one evening. Things have moved along quite rapidly after many years of little or no change and the need to free up bench space for other work caused an extra flurry of activity.

Triumph engines are not particularly complicated so few problems were envisaged and those that were likely to arise were expected to have been caused by the length of time this project has been on the go and the number of house/workshop moves it has had to contend with. Ergo, these problems were confidently expected to be of the ‘now which box did I put that in’ or ‘is that on the shelf here, or in the storage facility or my mate’s garage’ sort of scenario. A late game plan change to assemble all the bits I have on hand and then acquire the bits I haven’t sort of speeded things up and I admit some bits which rightly should have gone to the scrap bin have found their way back on to the bike. Before you all start writing in there is no intention to use the motorcycle with these bits but rather they serve the purpose of having all the boxes emptied and a way will be seen to progress with new bits… the gearbox sprocket is one such part which shouldn’t be anywhere near a motorcycle, talk about hooked teeth… We all know, or should know, such a sprocket would make short work of a new chain so it’s lucky I don’t even have an old chain.

As this rebuild is documented regularly elsewhere in the magazine and our sister publication The Classic MotorCycle, I don’t intend to go too deep into the bike in this column as well, suffice to add the component parts were all arranged on various parts of the bench so they could go into their respective places – the swinging arm spindle greased and ready to drive in through the lug, spacers and shims ready, then the gearbox cluster and other components which go to make the gears sorted. Little disruptions such as the absence of the correct length studs and screws were sorted by rummaging in the box of old fasteners. Even the fact the selector plate wouldn’t line up with the rollers on the selector forks at first became obvious under inspection and was quite easily solved – two cogs were the wrong way round on the layshaft and had been since the bike was stripped. Once the cogs were put in correctly the cluster verily jumped into place in the casting and we even had four gears engaging.

Missing from the project and again something obvious is one half of the Triumph forks. This is less of a problem than it may seem, as my intent had always been to use stronger forks in this project as the Triumph ones are 32mm diameter stanchions and even John Giles was quoted as saying they could wilt a bit. There are a couple of sets of BSA forks to hand though and with 35mm stanchions they’re much tougher.

Okay, it means a different type of front wheel will have to go in the bike – the spindle mounts are knock through on the BSA but clamp up on the Triumph but that is fairly obvious and a spindle isn’t hard to source or make for that matter.

Work progressed upwards on the engine and the little plastic trays which have so long been a part of this Triumph’s existence were emptied as parts were fitted to the engine. A rocker box was assembled from the bits which had once been inside it, a new spindle was needed because the old one was long gone, oil was pumped through the drillings and all seemed well in the world. I elected to not put the pushrods in place nor their tubes as the head was already sitting in place, bolts finger-tight. So, I thought I’d just put the rocker boxes on the head and screw them up finger-tight too. On the smaller unit engines the rocker oil feed comes into the engine via a thin tube with a banjo fitting on either end. The rocker bolt has a relieved section to allow the oil to flow into the box itself and this bolt slides up under the head and forms a third fixing on the front of the casting… or it does if the lug on the casting is there…

The exhaust box fitted as it should and once I find the domed nuts it will fit in place no problem but the inlet one is missing the vital bit on the head. It should have been obvious to me but it wasn’t. In my defence, where the lug had been was completely flat, so has at some point been cleaned up with a milling machine as no trace of the original lug is there. A review of several months of photographs clearly show the lug is missing and yet what is glaringly obvious now had been missed for goodness knows how long. Luckily I have a cylinder head which is scrap but has lugs and fins on it to replace the missing items.

My welder will be pleased…