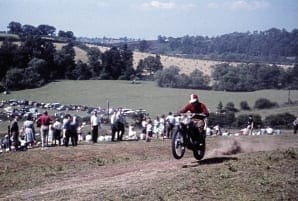 Legendary journalist Ralph Venables, in his weekly column in the Green Un in 1958, sang the praises of five young West Country men who he predicted were stars of the future.

One of these was Graham Wiggins; a then 18-year-old from West Wiltshire who, in a
12-year racing career, would twice win the hotly contested 250cc Wessex centre championships on a Greeves, and later have two highly successful seasons aboard a works Dot.

Now retired, after more than 40 years as a driving instructor, Graham still lives with his wife Mary just a stone’s throw from where his racing career started back in 1956.

But, as he recalled, scrambling was not his first love…

“My dad always had bikes and during his time in the military – he signed on underage to join the tank corps – he took part in races around the camp on his Army issue M20; many of these were against the likes of Fred Rist and Jack Bakewell.

But when the war was over times were hard and with a wife and young family to support he never got to race competitively on the Tarmac.

“As a young teenager my ambition was to own and race a 350cc Manx Norton, but on reaching 16 I had to content myself with a year-old James Cotswold scrambler which – fitted out with ‘bobby dodger’ lights and a silencer – carried me to work as an apprentice engineer.