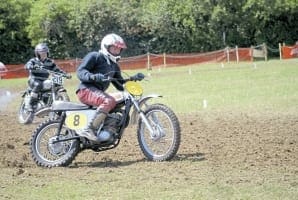 Time and time again proof arises that the British industry wasn’t short on ideas or talent. Finance on the other hand… Colin Sparrow looks over the Greeves 500.

Gone but not forgotten
Former Greeves race series champion Greg Radley shows the 500 can go…
By the beginning of the 1970s clouds were gathering for the British motorcycle industry and by the end of 1970 Royal Enfield and Velocette had gone, soon to be followed into mergers and eventual oblivion by all the great names.

The hitherto successful Essex firm of Greeves had not been immune to the ills of the industry. They had been forced to cease production of road machines when Norton Villiers stopped making their 4T twin cylinder engines in 1966.