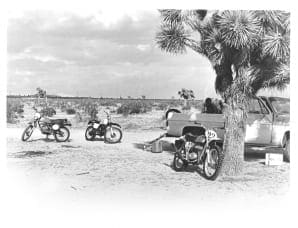 Part 1: Experiencing the ‘trail bike boom’ and riding off-road purely for the fun of it.

Golden days in the Golden State
A typical riding day in the Mojave Desert…
Everyone who has ever ridden a motorcycle for the sheer pleasure of it has recollections of their own golden days – periods and places where, in retrospect, it just couldn’t have got any better.

For me, and literally thousands of other dirt riders, that time was in the first years of the Seventies and the place was Southern California.

When I arrived in the USA back in the winter of 1968, before launching the California newspaper Motorcycle Weekly, off-road motorcycling was in the early stages of a phenomenal growth spurt.

During the last half of that decade it erupted from being a relatively small and mainly competition-oriented enthusiast pursuit into a true leisure pastime enjoyed by the public at large.