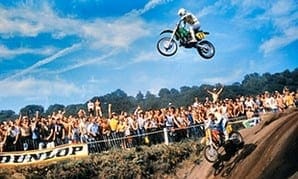 The five times world motocross champion finally succumbed in his struggle with myelodysplasia, a form of leukaemia after a 15 month battle on Wednesday 20th December. He was 51.

Although he is one of Belgiums most successful motocross champions, second only to Stefan Everts and Joel Robert, he is probably best remembered for his infamous double jump at the 1984 500cc British Motocross Grand Prix at Hawkstone Park, when he passed the ex world champion fellow Belgian Andre Malherbe in mid air. It was a pass that will go down in the annals of motocross history.

Our condolences go out to wife Sabina, daughter Maite and son Vic.