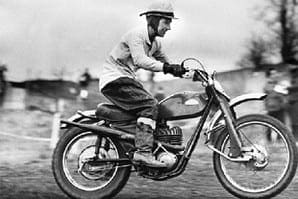 He first raced and worked for Cotton Motorcycles of Gloucester during the late 1950s and later joined Villiers in 1966 to become AJS competition manager. Fluff was very much involved in the development of the AJS Stormer scrambles machines.

In 1974 he purchased the AJS stock and manufacturing rights from the ailing Norton Villiers company to continue production of FB-AJS trail and scrambles bikes in Goodworth Clatford, Andover into the 1980s.

His funeral was held on July 25 at Basingstoke Crematorium, and anyone wanting to remember Fluff can do so by making a donation to: Hampshire and Isle of Wight Air Ambulance, 4 Kings Park Road, Southampton SO15 2AS.