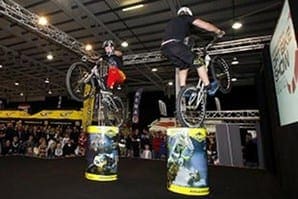 Each of the three-man team takes turn to play 'victim' as the other team-mates hop in and out of their splayed limbs, to the beat of the pumping music. Whilst sometimes getting a little too close for comfort for some of the gathered audience, there is little doubt that Danny & Co are firm Dirt Bike Show favourites.

Catch them over weekend from 10.30am.

World MX2 runner-up Tommy Searle is at the International Dirt Bike Show today. Catch Tommy on the stage at 11am when he makes the AMCA Masters presentation, followed by an interview with Jack Burnicle. He'll then be on the Kawasaki stand in hall one signing autographs and back on stage at 2.45pm.

The International Dirt Bike Show is open until 5.30pm today and tomorrow, and 5.00pm on Sunday. Adult admission is £15, youths £7.50 and children aged ten and under go free. Parking is plentiful and free!