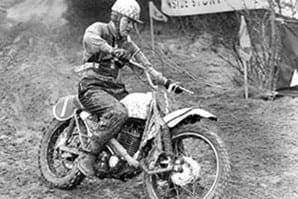 In Dave's view, he’d most likely have been world champion. Indeed, in his only GP outing that year, at the British round, he won convincingly.

The son of a garage proprietor, Dave had his first motorcycle aged eight, and was scrambling, on a Dot, at 16. By 1958, he was receiving Greeves support, the marque on which he won his European titles. He went on to ride Husqvarna and notably CZ, finishing third in the 1967 500cc world title chase. He was also the firm’s UK importer.

Dave continued riding in scrambles and long-distance trials into the 1980s, while he also set up a company, Bickers Action, in 1976, which arranged and performed stunts for film, including several James Bond and Harry Potter movies. The company still thrives, run by Dave’s son, Paul.

In recent years, Dave had been a regular on events including the Pioneer and Banbury Runs, as well as making an annual pilgrimage to Ireland for the ‘national’, where he would ride a sidecar outfit, as well as supplying his old rival Jeff Smith (and near neighbour, Suffolk dealer Andy Tiernan) with similar.

The funeral (on July 17) was a private affair but Dave’s wife Sylvia will arrange a memorial service, in Coddenham church, during September. Details to follow.