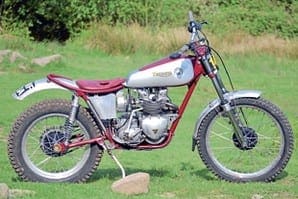 It is the same sort of thinking that decreed rear suspension would never catch on for trials bikes, or that a twin could never achieve the level of grip a plodding single could, and any number of similar examples of accepted wisdom.

What’s often forgotten is no matter how trick a bike is it still has to be ridden. Certainly as far as the feet-up sport is concerned, skill and practice often counts for more than super trick. It is more important that the bike feels right for the rider – a bike that feels right when it’s being ridden need not be the lightest of machines but it might seem as though it is.

In the classic period – for us here defined as post Second World War – Triumph only managed to chalk up one SSDT win, with Roy Peplow on a Cub in 1959. However, Triumph has a much better record in the pre-65 trial with 17 wins to its credit, four of which have been on twin cylinder machines, the latest of which is in front of me as I’m listening to Roger Bowyer running through the spec. Even a cursory glance shows that not a lot of ‘trick’ stuff has gone on here and this is backed up by Roger’s description of the bike build. What is becoming obvious is the Triumph epitomises the phrase ‘standard just well put together’.

These days the accepted practice is to select a load of off-the-shelf components, sort out a frame – either one that is brand new or a heavily modified original – and assemble the lot into something resembling a pre-65 machine. The Bowyer’s haven’t gone down that route at all and what is becoming ever more obvious is I’m looking at a reasonably standard Triumph 3TA circa 1963.

“It seems to confuse people,” Roger tells me. “Folk see what they want to see, or expect to see. After Rob had won the trial a picture appeared on the social network sites with a heading ‘how trick is that’. You’re a Triumph man, you tell me how trick it looks.” I was actually hard pushed to find the really trick bits – yes there are some and anyone taking a hard look at the bike would see the lightly modified Bultaco petrol tank and maybe spot the alloy barrels. I was expecting a lot more in the way of modifications and had convinced myself the bike had a Royal Enfield Crusader frame rather than the genuine Triumph one with its cast iron lugs and substantial steel tube brazed in.

Looking at the bike as a whole, Rob and Roger (well Roger mainly, Rob admitted he tended just to ride the bike rather than get involved in the building), told me the frame has been de-bracketed and has a few holes drilled here as an aid to weight saving but it is still a big, heavy item. 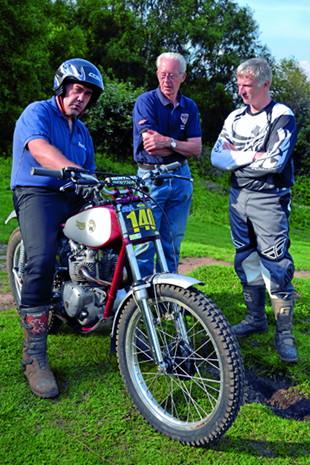 Way back in the mists of time, when pre-65 trials bikes were all new, their makers had to assume the purchaser would be covering a lot of road miles. Not only would a typical trial have roadwork involved but it would be likely the owner would have ridden to the start of the event too, possibly even use the motorcycle for getting to work during the week. With this in mind the fitting of sturdy brakes and a decent seat was seen as important by the factory.

Works riders would attempt to shed a few pounds off their machines by searching the parts books, or stores if they were close to the factory, for smaller, lighter components that hopefully the team bosses would turn a blind eye to if they fitted them. In Triumph’s case this meant the Tiger Cub hubs which were much lighter than the vast cast iron contraptions capable of hauling a sports twin to a stop.
The world moves on and these days Alan Whitton’s Cub style hubs – in aluminium – save even more weight and are a better brake than the standard steel ones. Laced onto the alloy hubs are alloy rims, saving an ounce or two more, the rear is a tubeless rim though for the pre-65 Scottish a tube is fitted to the IRC tubeless tyre as required by the event regulations. A pound or two has been shaved off the chassis by using a Tiger Cub subframe and swinging arm but they’re standard items just tweaked a bit. However, more important than the weight reduction, the Cub bits slim the rear end and provide more room for a 4.00in rear tyre.
One of the benefits brought about by years of suspension development is that most pre-65 riders enjoy a much more comfortable ride and don’t experience pogoing from over sprung suspension units. Nowadays, when the rear tyre hits a step or a rock, the suspension takes up the strain and allows the rider to concentrate on where the bike is going. The Bowyer Triumph wears Falcon Classics, tuned to Rob’s weight, on the rear. Watching him tacking some rocks at our practice session, they work well.

Front suspension too has benefited from years of experience and development. No longer is it enough to just to make sure sidecar springs are in the tubes and maybe a heavier grade of oil too. The modern rider needs to be able to feel what the front wheel is doing – this is done by hiding modern forks inside the original units. The popular Marzocchi and Betor systems have the same diameter stanchions as the BSA and Norton legs used by everyone… except Team Bowyer.

In answer to my question “how did you fit modern internals to Triumph forks?” Roger Bowyer simply said “we haven’t – we paid a lot of attention to their assembly but take them apart and they’re Triumph inside.” Nothing special at all then? My voice must have sounded plaintive as he added: “The sliders have been chromed and the stanchions hard chromed, plus Alan Whitton does a lovely alloy seal holder that screws on…” Aha! Trick then… Well okay, not exactly cartridge suspension but the seal holders allow a sturdy fork brace to be fitted. “The brace stiffens the front end up and now when Rob turns the bars the wheel turns too,” says Roger.

By now it had become almost a mission to find something that was ultra trick on this smart motorcycle… Renthal bars, yes, most people use them too, Domino controls are also popular – Rob prefers the slow action twist grip – with the pre-65 scene. Folding footrests, welded to the subframe are fairly common too, surely there must be something. Hold on a minute, your right foot is going to be a bit busy isn’t it Rob? Kick-start – a Gas Gas one fitted to the Triumph shaft – gear lever and brake all on the same side. “I couldn’t get on with the brake on the left,” Rob admitted, “we made up a shaft to go through the swinging arm spindle and the brake is now on the right.” There is little or no advantage to this, other than Rob prefers it this way, if anything it adds an ounce or two to the all up weight but the brake is where Rob wants it.

The power unit
One of the major disadvantages a twin has compared to a single is a longer crankshaft, an extra con rod, piston, pair of valves – plus their actuating gear – longer cams and a bigger barrel and head. This is quite a lot of extra weight, the advantage being the weight is lower down and in a compact unit but still, lifting a unit 350/500 Triumph engine compared with a B40 BSA is quite a task.

A number of things can be done to reduce the weight of the engine, drilling holes is one – there are a number of these here and there – but replacing cast iron with alloy is a better way. Triumph realised this for its works riders in the 60s and sanctioned the casting of a few alloy barrels to the cast iron pattern.

Apparently a dozen were sanctioned, rumour has it the foundry did a few more as people said ‘I could do with a set of them’ so no one actually knows how many were cast in total. Whatever, Team Bowyer has a set thanks to a friend who was on the team in the 60s. More alloy is in the form of a clutch drum, though the primary drive is by chain, it still saves some weight and mated to a PVL ignition system that ensures a spark to each plug be the bike hot, cold, wet or dry.

Unusually Rob’s bike has a wide ratio cluster in the gearbox, we say unusually because even the pre-65 Scottish doesn’t cover hundreds of miles and there is no need for a high road speed. Most riders forgo the wide spread of gears for a closer road version which means second can be used in sections. “Ah, well, I tend to do everything in first,” Rob says.

So, the motor, apart from the alloy barrels, is fairly standard? “Yes,” says Roger, “it’s a bearing bottom end rather than the plain bush, has 5TA pistons, cams and valves, runs on a 15/40 we get from the garage, doesn’t leak and has the standard oiling system.”

Looking round the bike again with Rob and Roger, they pointed out the fabricated oil tank “…ours, but to Triumph dimensions which are critical for proper top end oiling…” It’s topped off by a special seat with a hole in it… not in case Rob has a scare but to access the filler cap, it’s a handy place to put a pint pot too. Also a Bowyer fabrication is the air filter housing which contains a standard Triumph filter and is waterproof while allowing free breathing.

What’s it like to ride?
Given that Rob is a little shorter than me, I expected to crouch over a bit but was pleasantly surprised to find the dimensions better than my own B40… cue work on B40. The whole bike has clearly benefited from attention to detail by Roger and anyone reading this in the hope of gleaning a secret or two should take this on board… attention to detail is paramount.

There’s first-kick starting, gears select easily, no clutch slip or drag and Rob can flick the front end round on the throttle and clutch… Britton can’t. On my brief ride I followed Rob’s advice to rev it in bottom gear and there were no hazards in our test session that couldn’t be tackled in this way.

For my own amusement I tried a few hills in second and made the engine gasp, me too if I’m honest – things happen quite quick on a Triumph twin in second gear. Even pulling away from tickover, the bike didn’t feel like it would stall… how about a full lock turn, in third, on a bank? Yes, luckily, reading this is the first Team Bowyer will know of that particular test… though maybe Rob would have been able to cope with such abuse to the bike and pull off a third gear turn. Though there were no typically Scottish sections in Cheshire there were enough differing types of going to realise why Triumph twins are doing a bit of winning these days.
All in all? A well put together motorcycle, ridden by someone who knows what they’re doing. Is it trick? Not hardly.