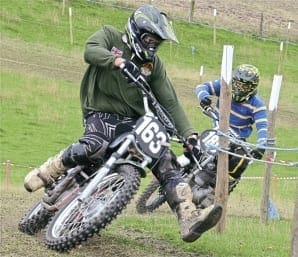 We’re delighted to announce Classic Dirt Bike will once again be associated with the Classic British Scrambles Championship organised by Dave Gittins.

Classic British Scrambles Series
Wayne Partington and Ricky Peddar (pictured) will be defending their titles in 2016.
This excellent series has been part of the scene for a good number of years and produces close and exciting racing at selected events around the country.

We try and feature as many rounds as we can in the pages of CDB, not easy with just four issues a year, but we try.

As soon as dates are confirmed for the new season, we’ll let you know, because we’re like that, though it’s likely Dave Gittins will have a list available at Telford.