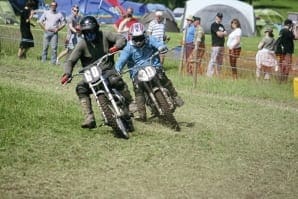 The Annual Cholmondeley – pronounced ‘Chumley’ – Pageant of Power takes place every June in the beautiful grounds of Cholmondeley Castle near Whitchurch in rural Cheshire where the Cholmondeley family have lived since Norman times.

Cholmondeley Pageant of Power: Classic Scramble Demonstration
Peter and Bill in action, is Bill lining up to pass Peter?
CPOP is a three-day pageant encompassing absolutely everything that any self-respecting petrol-head could wish for.

Not only can you view some of the world’s most iconic modern and classic cars and motorbikes but also see and hear them on the fabulous, tree-lined sprint circuit, or on the lake, as the jet-ski racing free-style competitors wow us.

Add in the 50s designed RAF Vulcan bomber on what perhaps was its final outing.

The Pageant has something for everyone.

If the drama and noise of cars and bikes being revved to the limit becomes too much there’s the grounds and castle itself and the trade village with plenty of options to stem your hunger pangs or quench your thirst.