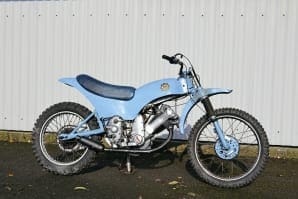 In the competition world the construction of a special used to be a reasonably common thing, the motivation for such a project being either not enough funds or dissatisfaction with the standard machine.

In the case of the former reason the result was often referred to as a ‘bitsa’, as in bits of this and that or whatever the builder could source for very little.

Often such machines were odd-looking creations depending on the ability of the builder and the available expertise.

However, when there was dissatisfaction with the standard product it usually meant the rider/owner was at the sharp end of the results and the production machine was found wanting. In this case some fine machines have resulted and become marques in their own right.