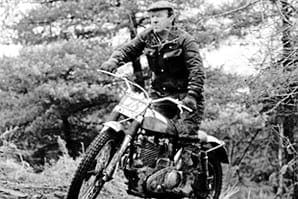 Aubrey began riding motorcycles as a teenager and motorcycling became a huge part of his life, both as a competitor and a businessman, establishing IW Motorcycles in the mid-1970s. Trials and scrambling was Aubrey's biggest love and even while he was completing his national service he still made it home every weekend to take part in trials.

Competing on the Isle of Wight and around the country, he won more than 200 cups, shields and medals and was the first Englishman to win the Supreme Trophy, Shillelagh, at Ireland’s Munster Club, beating 40 competitors in a four-hour ride across mountain roads in 1970.

Aubrey’s other achievements included winning the Isle of Man and IW two-day trials and he was top of the Southern Centre. While Aubrey was riding on the Island, he had to be handicapped in order give other riders a chance.

Aubrey leaves his wife, two children, and three grandchildren, Emily, Christopher and Eleanor. Eleanor is now continuing Aubrey’s love of bikes and has recently started competing national in trials, as well as riding on the Isle of Wight.