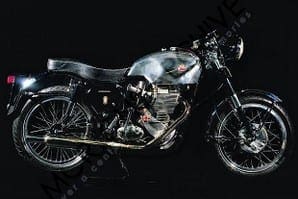 Members of the Gold Star Owners Club are well used to my comments of ‘not got any proper Goldies then?’ when on their stand at shows and my theatrically OTT displays of searching for singles with ‘proper tyres’ and ‘bars’ is tolerated in good humour.

Earlier this year, at the Carole Nash Bristol Classic Motorcycle show they were ready for me. As I viewed their tasty line-up of Clubman models and before I could come out with my standard line they pointed behind me, where Nevil Wright’s Goldie scrambler stood. “That more to your taste then,” said Ron May, adding “it must be, you’ve gone quiet.” He was right, it did appeal to me. It’s the attention to detail that does it for me; clearly the owner, Nevil Wright, knew what he’d been doing as he worked his way through the bike.

With the Goldie Scrambler, the whole Gold Star range actually, BSA had made a pretty good fist of the job but it was essentially a production bike and had to be compromised slightly for production, so the prospect of seeing what can be done by an engineer was exciting.

I was keen to talk to Nevil as soon as possible but had to wait until day two of the show as he’d dropped the bike off on Friday and was coming along on Sunday to pick it up. Meanwhile I kept gravitating back to the Goldie stand to look at the bike… until they told me to clear off.

Nevil turned up on Sunday and I got a chance to chat with him about the bike and arrange to pop along to his workshop for a more in-depth chat.

The basis
All project bikes like this have an inspiration point – with Nevil it was his dad’s Goldie Scrambler. “I’ve built this bike as a tribute to what my dad was going to build and was actively collecting parts for. He’d raced a BB32 Goldie for years and constantly updated it as he went but always had the idea of doing something special. There were a number of parts in my workshop from those days and I felt it was right I should build up a bike from them.”

This parts cache consisted of a 350 barrel, head and conrod, so not the most comprehensive engine bits, but engineers and enthusiasts are rarely fazed by such inauspicious details. Nevil popped along to Netley Marsh, where he tripped over a set of BB32 crankcases, then he had a word with Terry Weedy who turned up a BSA single frame; a twin one could have been used but the single has the oil pump kink needed for a BSA single engine. Gold Star specialist Dave Flintoft – see our Goldie engine feature last issue – supplied a crank. This meant the project was now ‘on’ and time for the most important workshop accessory of all to come into play – the kettle.

Don’t under estimate the value of a kettle in the building of a bike; making a cuppa and having a think early on can save a whole lot of heartache later. Oh and hot water can provide a gentler heat than a blowtorch for freeing stuff off.

Okay, tea brewed, Nevil decided that the Goldie would reflect the concept of pre-60 but be built to ride, so he wanted it to be as light as possible but look as though it could have been seen on the track during the Fifties or Sixties. Personally I think he’s achieved that with his mix of parts from various sources.

In such a build there are certain accepted things to use; Norton forks are one and an Ariel swingarm is another. Norton forks are not that difficult to get a hold of but Ariel swingarms are rarer. Nevil was bemoaning this fact to Terry Weedy, who nodded sagely and agreed with him then fished one out of the workshop and plonked it on the bench, adding “got a gearbox yet?” Overcoming his surprise at seeing the swingarm Nevil admitted a gearbox was missing too and it turned out Terry had one of these spare too. It had been used to power a lathe and had had the clutch cable mount hacked off, though this wasn’t a great concern for a man with a decent workshop and the capability to use the stuff in it. More restrictive was the standard cluster inside the shell, though Goldie scrambler Alan Arnott had the correct one and a deal was done.

With the bones of the project now in place some assembly could begin. Mounting the engine and gearbox in alloy engine plates was quickly achieved but, thought Nevil, those heavy alloy plates could have an ounce or two shaved off them… so into the milling machine they went. Nothing fancy about them but they just look a bit special now and are lighter. 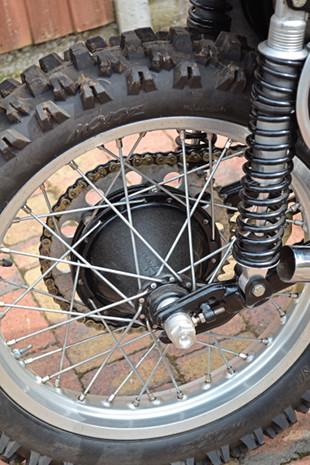 Weighing up
From the start Nevil wanted to make his bike as light as possible – the accepted practice is to hollow out bolts and use alloy nuts wherever possible. The danger for someone like me in doing this is that I’m not an engineer and could quite conceivably make a part too light and weak. Luckily there’s no danger of that here, given Nevil’s experience in motor-race engineering.

Mounting bolts and spindles were quickly drilled through and alloy fasteners and spacers made, all adding to the ‘look’ of the bike. As we chatted and inspected the bike it became clear the thought and experience that had gone into this build. Foot rest brackets and frame-strengthening plates were fabricated from very thin sheet steel and were ‘deformed’ in a press to add strength without weight. Nevil says: “Deforming things in this way is accepted race practice and it works.”

As this is a separate engine and gearbox setup there has to be some connection between them and the method chosen here was to use a single-row primary chain with a Norton clutch. Two reasons for the Norton unit; one, it is lighter; two, and probably most important, it has a cush drive inside the hub to smooth out the power impulses. Originally the BSA would have had a massive spring on the crank and be mated to a cam nut which would give slightly under strain. With the electronic ignition mounted on the end of the crank this setup is no longer possible.

As Nevil was speaking and I’m scribbling away, it took a moment or two for what he’d said to sink in. “Hold on a minute… you’ve a magneto on there!” It turns out the ‘magneto’ is actually just for decoration and isn’t a magneto at all but a cleverly shaped lump of alloy. The ignition is crankshaft mounted and when Nevil looked at the bike it didn’t seem right with a gap where the magneto should have been so he fabricated a mock one… I’m not the only one to be fooled by it.

A bit of bounce
It may technically be possible to pull apart old Girling suspension units, rebuild them with whatever is needed and crimp the tubes back together as the factory did. But I don’t know of anyone who does it, or even if it is worth doing as there are so many superb replacements out there. Nevil’s choice are S and W Worx shocks as they were available.

Up front though there are Marzocchi internals in the Roadholder sliders. In common with most people intent on using a bike in the real world, these days modern internals work much better than older forks and are more easily replaced. There’s an added advantage, the stanchions already come hard chrome plated so the tolerances are much closer, allowing a more comfortable ride for whoever is mounted on the shortened Goldie replica seat.

As we chatted it was clear Nevil’s bike was a good mix of modern components, newly manufactured replica parts and restored originals like the fuel and oil tanks. New rep bits such as the air filter come from Alex Baraona who started making bits for his own Goldies and ended up supplying other people too.

Like the rest of the world, Nevil uses alloy Renthal bars to hang on to as the bike is motoring along but has a period Doherty throttle to get the slide up the business end of the concentric carburettor. The carb is almost sorted for the methanol the bike runs on, and Nevil was tempted to run at the British Bike Bonanza a week or two before we got to speak with him but wanted to try the bike out first, somewhere well away from others, so he could set it up correctly.

“I’ve built the motor to CB spec,” he tells me. “It’s what the factory would have been running, even though the outside would look like a DB, inside was the earlier, heavier crank and the CB exhaust valve in the head is bigger than the DB.”

He’s fitted O-rings to as many shafts as possible to reduce the amount of oil leaks a British bike can have. “I don’t have a problem modifying stuff, if it will work better and the bike is to be used. Naturally if I was doing a proper restoration then originality would be important but this bike will get used.”