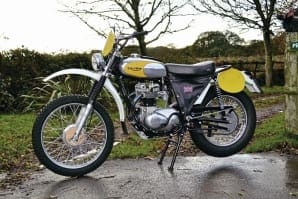 A stint as deputy manager for the Vase team in the 1973 ISDT gave Chris Oliver first-hand experience of the Triumph Adventurer based team bikes… handy when he came to build a replica.

A Triumph of ingenuity
A deviation from standard is the centre stand which Chris wanted on the bike – the originals didn’t have them, relying on a side stand only.
“If I could have afforded one, then I would have had one,” says Chris Oliver as we chatted at Sammy Miller’s museum in Hampshire.

What Chris was talking about was his superb recreation of a 1973 ISDT Trophy Team Triumph.

The Adventurer these bikes were based on was always an expensive motorcycle and in 1973 out of reach for Chris.

He had plenty of experience of the Triumphs in their competition setting as in 1973 he was assistant team manager for the Vase Team and over in the USA with Ian Driver, Ken Heanes and Fred Henley.