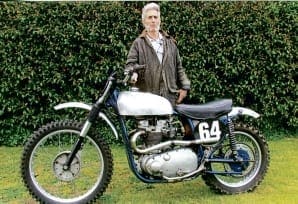 I liked the TriBSA feature in the last issue and thought I’d send photos of my TriBSA that my son, Geoff, bought from Ian Davis.

Davis made third place in the Welsh Championship on 2010 on it.

It has an all-alloy T100 34378 engine with big bearing crankcase, as well as CNC alloy con rods, balanced Norton crank central plugs and is tuned by SRM.

The package is finished with a lightweight seat and mudguard bracket.

I’m hoping my son Geoff, who was second in the 2012 pre-60 championship, will race it when he gets more time to do it. We use the highest octane petrol available, a race fuel PSN Gasoline UN1203 Hyperflo, Turbo Ultimate product no 22644 unleaded 105 octane.

Another TriBSA of note and very fast is Jim Aim’s Orcadian. It is very similar to the one he won the grand final on during a national race at Hadleigh in Essex in 1966.

In doing so he beat all the top riders including the whole BSA works team. The commentator ‘Slim’ Barker went completely hysterical. I was riding but didn’t make the final. The same year Don Rickman beat all the foreigners at Farleigh Castle on his Metisse winning the British GP.

But back to my bike, before I had it, it had footrests bolted on the chain case. I replaced it with a footrest on the frame, it had good mounting points and was much safer.

I rode at all the old tracks, Copfield, West Stow, Bentley, Weselton Scramble and Hill Climb, the old track at Reading, etc. I was never a star but made third in 1969 and fourth in 1971 in the Eastern Counties Championships, riding a Goldstar in ‘69 and B50 ‘71.

I could do another page but it would be too much for your shredder.

No need to shred this David, a great story and slice of history and thanks for sending in the pics. And it’s nice to see a bike being used as it’s meant to be used; in the cut-and-thrust world of classic motocross.