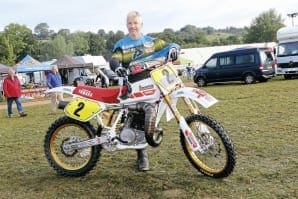 Speak to any EVO or Twinshock motocross fan and they will probably say the highlight of their season is undoubtedly the Vets MXDN at Farleigh Castle.

2015 Vets MXDN: Farleigh Castle
One of the European contingent who make this event so special is Cedric Mellotte with a pretty trick Yam.
The legendary ex GP circuit, which has now earned the title, “The field of dreams” is once again drawing in the crowds as it hosts probably one of the biggest motocross events in the country, bar none.

Not since the days of the epic Dave Thorpe and Andre Malherbe battles of the mid-80s has the venue witnessed such large and enthusiastic crowds.

Of course, the very mention of Farleigh itself is enough to draw more spectators and riders than any other venue in the country.

Saying that, this year’s event was dumbed down slightly, but more relaxed than previous years, despite the fact that The Hungerford Arms has closed its doors.