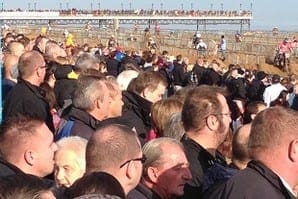 Held over the November 8-9 weekend, thousands of spectators flocked to the event, helping to produce welcome late season revenue for local hoteliers and retailers. On-track the race, now in its fifth year, saw the biggest overall entry numbers so far. The major winner once the action started was the very talented 19-year-old Gloucestershire based Dan Thornhill. After warming up on Saturday by taking victory in the Clubman’s Class, Dan then also topped the main three hour solo contest on Sunday to earn himself a £1,000 winner’s cheque. Also bagging a prestigious Skegness Beach race victory throughout the weekend were Jake Edey (Clubman Youth), John Littler (Clubman Over 40 Veterans), Carl Smye (Clubman Over 50 Veterans), Bailey Edwards (Quads), Alun Davies/James Ferguson (Sidecars) and Alex Owen (Adult Solo Veterans).

Before the racing could start though there was the mammoth task of erecting the almost endless lines of steel crowd control barriers which mark the circuit. So, the hard working AMCA Events were on-site early Tuesday morning and ready to commence work whilst Craig Chamberlain and his dad manned the plant kindly supplied by LPE, ready to move, mould and reshape the soft, spindle deep sand into the 2014 race track. And after the event, of course, the team were required to return the beach to how it was before!

Next year's event is provisionally pencilled in for November 7-8, so make a note in your diaries.