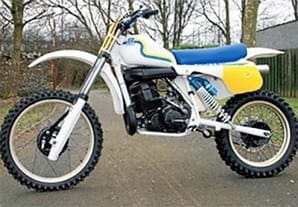 Finlay originally bought the bike in 1996 as a non-runner. The seller was a local motocross racer, Davie Lawson, who had had the bike lying in his garage for more than four years just gathering dust. Finlay says, “When I first laid eyes on the bike I thought ‘oh my God look at the state this thing’s in’. It had the wrong exhaust fitted, all the wrong plastics, it was covered in rust and it looked like a right old dog.”

Finlay confesses that he had always had a secret hankering for the Swedish marque. After some brief negotiation he promptly relieved the seller of his rusty burden when the agreed monetary £250 changed hands. “My original aim after buying it was to try and do the very basic of repairs just to get the bike going; I had to buy a new ignition unit for it almost immediately in order to hear it running and I did that as soon as I got it home”.

“Before I knew it, no sooner I had fixed one part another needed doing and then the jobs just started to mount up. It was then I decided that I might just as well do it right and start from scratch and do the whole job properly”.

Finlay started by stripping all the relevant parts from the bike, making notes of what needed replacing and what could be salvaged using a bit of hard work and elbow grease.

Firstly, the frame of the Husky was sent for bead blasting and powder coating at a local paint shop along with the fork legs, swingarm, shock springs, fuel tank and rear torsion bar. The engine was then dropped off at Husky dealer Charlie Preston’s workshop in Leicestershire who stripped and rebuilt the bottom end of the motor renewing all the usual bearings and seals and basically making sure everything was where it should be and in prime working condition. The wheels and spokes were in surprisingly good condition and only needed some TLC and adjustments to bring them back to a reasonably passable condition.

Dunfermline Motorcycles’ twinshock guru Paul Chiappa then took care of the Husky’s top end by machining the barrel along with rebuilding and servicing the rear piggy back shocks. “Paul helped me out a lot during this build and he was always on hand to offer any technical advice if I got stuck along the way,” said Finlay.

To complete the refurbishment the bike was treated to brand new fasteners throughout, then everything was double checked prior to its first start up. “After completion I tried the bike in a local field and it was superb right from the off,” said Finlay, “but I just could not bring myself to race it on a motocross track. I did a bit of racing on a Honda CR500 back in 1992 but I never really got anywhere results wise but I still enjoyed the experience nonetheless and it was really only for a bit of fun anyway”.

The hardest part of all during this build was trying to source an original Husqvarna CR500 exhaust system – they are almost impossible to find and are like the proverbial hen’s teeth to source. “It was a long time before I located a suitable replacement part to fit.”

The project had taken Finlay almost three years to complete, trying to fit it in between work commitments and other jobs around the house, although he was never in a hurry to get the job done in any case. “My original intention when starting to build the bike was to race it but, after the time it’s taken me, the man hours I’ve put into this project, and seeing how it’s turned out, I just couldn’t bring myself to see it covered in dirt. I know that sounds quite sad, bearing in mind that it is a dirt bike, but even now I’m still looking for more things to do on it”.

Finlay’s wife Rhoda doesn’t mind one bit when Finlay is locked in his workshop fiddling with his bikes to the wee small hours. “At least I know where he is when he’s in the garage and it keeps him out of the pub. It also gives me more freedom to do what I want to do without a man getting under my feet… yeah the garage arrangement suits me fine.”

Now that he has finished the Husky, Finlay is well pleased with the results and is very reluctant to sell the bike on. “I have no intention of racing this bike but I would love to see how it goes on the race track… with a decent rider on top of it of course. The hours of hard work and effort I have put in on the construction of this machine just makes me want to keep it and move straight on to the next assignment, but needs must and I need to sell this finished bike to finance my next project, a 1978 Suzuki TS100 trail bike lying in pieces in the back of my workshop.”

Finlay refused to count up the actual cost of what this rebuild has set him back. “If I was to do that I would probably never build another bike and I know I’ll never get back what I have spent on it… it’s not just the money, it’s all about taking something that is of no use to anybody and making something special out of it and seeing the finished results.”

When asked if he would do it all again Finlay promptly replied, “too bloody right, no problem”.